Support of world crucial to respond to catastrophe of floods: Bilawal 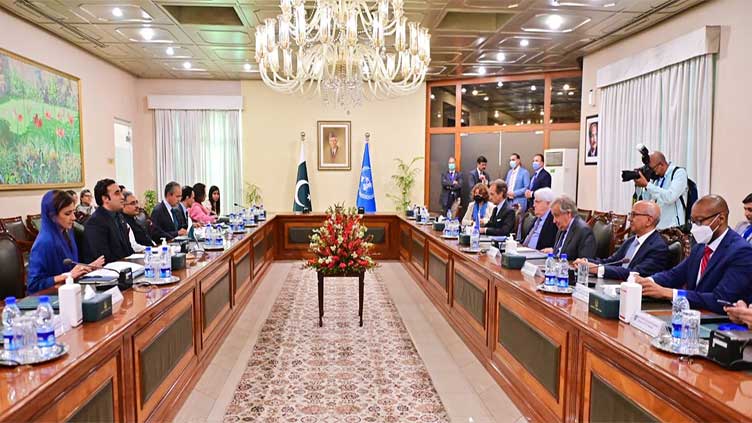 Support of world crucial to respond to catastrophe of floods: Bilawal

The minister made the remarks during his meeting here with UN Secretary-General Antonio Guterres. Minister of State for Foreign Affairs Hina Rabbani Khar and Foreign Secretary Sohail Mahmood also joined the meeting.

The Foreign Minister appreciated the Secretary-General’s timely visit to demonstrate solidarity with the people and Government of Pakistan in the wake of the catastrophic floods in the country. He expressed gratitude for the Secretary-General’s strong push to mobilize international assistance for the people of Pakistan, including through the UN “Flash Appeal” to complement the Government’s ongoing response.

The Foreign Minister noted that unprecedented rains had triggered the worst natural disaster in Pakistan’s history, submerging one-third of the country and affecting over 33 million people, with colossal damages to critical infrastructure and livelihoods.

Giving an overview of the steps being undertaken by the Government to respond to the calamity, the Foreign Minister stressed that the challenge exceeded Pakistan’s resources and capacities; therefore, the support of the international community was crucial to help the country respond effectively to this climate catastrophe, and to recover and rebuild, in a sustainable manner.

The Secretary-General reaffirmed the full support and cooperation of the UN, both for ongoing humanitarian relief work as well as for long-term recovery, rehabilitation, and reconstruction. He stressed that it was not only a matter of generosity or solidarity of the international community but of justice. The Secretary General discussed various ideas for mobilizing international finance and for enhancing fiscal space for Pakistan’s efforts to rehabilitate and reconstruct. Both sides exchanged views on how to reinforce climate action, with special emphasis on supporting the adaptation efforts of developing countries including through debt swaps.

Secretary-General Guterres is on a two-day solidarity visit to Pakistan. In addition to his meetings with the leadership in Islamabad, the Secretary General will also travel to areas most affected by floods to interact with the displaced people and witness firsthand the relief efforts.