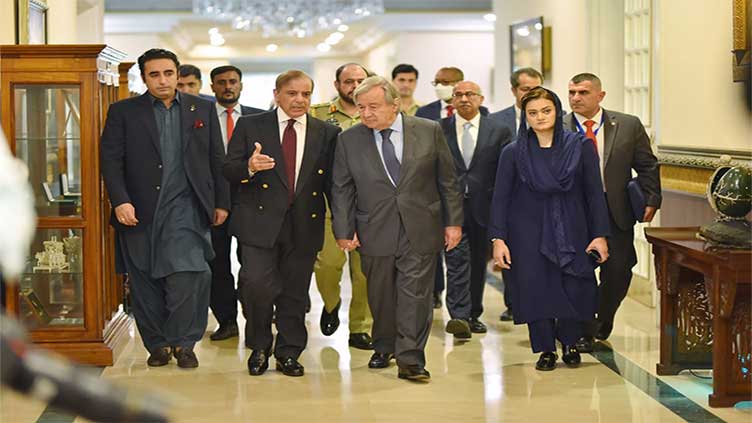 The two sides focused on joint efforts to carry out relief, rescue and rehabilitation at international level to mitigate the sufferings of the flood-affected people.

The UN Secretary-General, who has also launched a global appeal to raise $160 million as flood assistance for Pakistan, arrived in Islamabad early this morning to highlight the catastrophe at international level.

Guterres in a tweet said; “I have arrived in Pakistan to express my deep solidarity with the Pakistani people after the devastating floods here.”

Earlier, the prime minister welcomed the UN Secretary-General as he arrived at the PM House along with his delegation.

The Secretary-General is also scheduled to visit the flood-affected areas.

The Prime Minister Shehbaz Sharif called on the UN Secretary General Antonio Guterres at the Prime Minister House in Islamabad on Friday. They exchanged views on the national and global response to this catastrophe caused by climate change.

Earlier, the Minister of State for Foreign Affairs Hina Rabbani Khar received the UN chief at the airport.

According to the Foreign Office, during the visit, the Secretary-General will travel to areas most impacted by the climate catastrophe. He will interact with displaced families and first responders in the field, and oversee the UN’s humanitarian response work in support of the government’s rescue and relief efforts for millions of affected people.

The Secretary-General’s visit will further raise global awareness about the massive scale of this calamity and the resulting loss of life and widespread devastation. It will contribute towards enhancing commensurate and coordinated international response to the humanitarian and other needs of the 33 million affected Pakistanis.

The Secretary-General actively supported the US$160 million UN “Flash Appeal” to fund Pakistan’s Flood Response Plan and contributed a powerful video message at its launch event held simultaneously in Islamabad and Geneva on 30 August 2022.

The UNSG has been consistently stressing the linkage of such disasters with the impacts of climate change and warning the international community about the existential threat to our planet in case climate change was not addressed in a timely and effective manner.

The Secretary-General’s visit will also spotlight the importance of sustained international support for Pakistan through the rehabilitation and reconstruction phase, and for building resilience against future climate shocks.