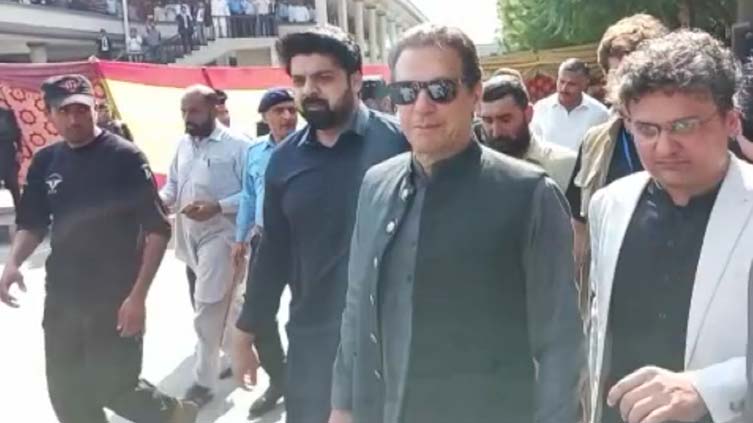 ISLAMABAD (Dunya News) – A five-judge larger bench of the Islamabad High Court (IHC) has resumed the hearing against Pakistan Tehreeek-e-Insaf (PTI) Chairman Imran Khan on the charge of contempt of court for threatening Additional Sessions Judge Zeba Chaudhry during a public rally.

Ministers and MPs of Punjab and Khyber Pakhtunkhwa were prevented from entering the IHC, who have gathered outside the court, showcasing solidarity and support for the PTI Chairman.

Furthermore, a large amount of police personnels have been appointed on the occasion of Imran Khan’s appearance in court. While PTI Chairman upon his arrival in the court, said that he will be addressing media after the hearing.

Hours before a five-judge larger bench of the Islamabad High Court (IHC) was to resume hearing of a contempt of court case against former prime minister Imran Khan, the PTI chairmen on Thursday morning filed a miscellaneous application before the court seeking permission to submit written arguments in the case.

In his fresh plea, Imran Khan argued that the high court cannot exercise suo moto jurisdiction as per the Constitution. The arguments on the inadmissibility of the contempt case should be kept on record.

“The written arguments will also be explained during the course of the proceedings,” read the plea.

IHC in its previous hearing on Aug 31 gave PTI Chairman another chance to submit a “well-considered” response in the contempt proceedings initiated against him for his controversial remarks about Judge Zeba Chaudhry.

The PTI Chairman Imran Khan on Wednesday submitted a supplementary reply in contempt of court case against him.

Former prime minister, in his reply expressed deep regrets over his unintentional utterances and said that he could not think of speaking anything against the judiciary.

He further said that his words were not meant to hurt the feelings of Judge Zeba Chaudhry. “The utterances were never meant to interfere with or in any way influence the course of administration of justice,” he said.

The former premier further said that he had great regard for the lower judiciary and that he supported women’s rights in Pakistan.

Imran Khan said that he was "not aware" that the matter was sub-judice when he made the comment and added that he was moved by the visuals of Shahbaz Gill gasping for breath.

However, he urged the court to discharge him from the case under the Islamic principles of forgiveness and restraint.