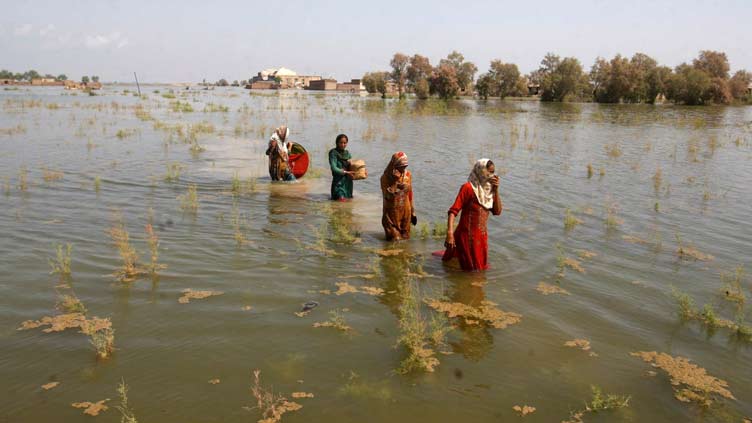 SEHWAN (Reuters) - Rubina Mallah took a perilous, three-hour boat journey across flood waters to get to the nearest hospital in time to give birth to her baby son, as the roads leading to the clinic in the southern Pakistani city of Sehwan were submerged.

The 27-year-old is one of tens of thousands of pregnant women displaced by historic floods that have inundated close to a third of the country and affected 33 million people, many now in camps.

"I was worried that night as the waters from the lake overflowed," Mallah told Reuters as she cradled her one-day-old son Muhammad Tayyab. Her village, located on the edge of the huge freshwater Manchar Lake, is now under water.

"My husband brought a boat, I travelled three hours to reach the hospital where my delivery took place."

Tayyab has started life in a makeshift shelter in a school being built on the outskirts of Sehwan town. It is a common fate as millions of Pakistanis seek safety from rising waters that have flooded homes and fields and destroyed livelihoods.

Mallah s husband, Mushtaq Mallah, said the family originally decided to stay at home because they had nowhere to go, and so set up camp on their roof.

"My wife then started having labour pains at around 10 at night," he recalled. "We passed the night in despair; in the morning I brought a boat ... and we reached the hospital.

"It was a journey of despair. Each time the floods come we become destitute."

The hospital, Abdullah Shah Institute in Sehwan, is about 15 kilometres from the Mallahs  home. Ordinarily it would have been an easy road trip.

But since torrential rains fell through August, Pakistan s largest freshwater lake has become dangerously close to bursting its banks, even after having been breached in an operation to keep the waters at bay.

Nayla Qureshi, a gynaecologist at the hospital, said its outpatient department was receiving around 150 pregnant women each day from surrounding areas.

Since Tuesday, six women displaced by the floods have delivered babies at the institute, and one patient underwent an emergency C-Section, she told Reuters.

"Our workload has increased. Some of our doctors who belong to different districts are staying here as there is an emergency. Pregnancy is not the (only) issue... women are coming with psychological trauma of total loss," Qureshi added.

The director of the hospital, Moinuddin Siddiqui, said medical teams were visiting camps to give pregnant women necessary medicines.

"Those who are full-term pregnant, we advise them not to deliver their babies at camps at any cost," Siddiqui said. "No doubt, the floods are likely to increase the chances of infant and maternal mortality," he added. At the hospital, another expectant mother, 32-year-old Dilshad Allahwarayo, had also arrived by boat. "I was having labour pains when the floods came," she said.

UNFPA s latest assessment is that 138,000 women in need of humanitarian assistance due to the floods are pregnant and 40,000 are expected to deliver their babies in September.

The UNFPA is racing to reach those due to give birth this month, working with the World Health Organization (WHO) and the U.N. s children agency (UNICEF) to send out mobile teams and set up temporary hospitals in camps.

Medics are particularly concerned about women who cannot access medical care in time who have complications requiring delivery via caesarean sections or those who develop post-partum haemorrhaging, both of which can be deadly or result in disability without access to specialised healthcare. Even before the flooding, nationally 186 women died per 100,000 live births, according to official figures.

That rises to 224 per 100,000 births in Sindh province, where the Mallahs live, and 298 maternal deaths per 100,000 births in Balochistan, the other hardest hit province. "One of the issues is that even prior to the flood the maternal mortality rate was high," Kadirov said. "The damage to health facilities and infrastructure is unimaginable, which is putting the lives of pregnant women at great risk," he added.