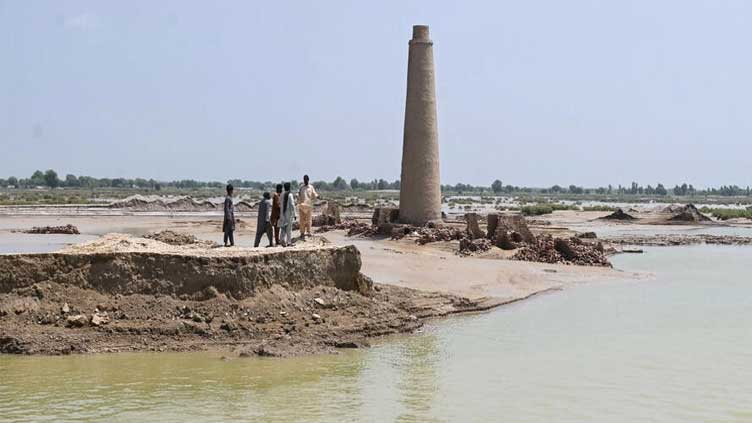 Rajanpur (Pakistan) (AFP) – The brick kilns that dominate the small village of Aqilpur in Pakistan’s Punjab province now lie abandoned, furnaces extinguished by weeks of torrential rain that have caused the worst floods in the country’s history.

Though the floods that engulfed Aqilpur and its surrounding fields have receded from the highs of a week ago, the kilns are still surrounded by water.

Most of those who lived on-site -- part of the country’s millions-strong workforce known as "daily wagers" because of their piecemeal salaries -- abandoned their homes for higher, dry ground.

"I come here daily on my bicycle and go from one kiln to another to look for work but find nothing," said Muhammad Ayub, an itinerant labourer.

Now, a road that runs through the village has become a kind of town square for the kiln workers, who find themselves both homeless and out of work.

Ayub, 40, has a sick mother and an eight-year-old daughter to provide for.

When his home was destroyed in the torrential rains that preceded the flood, hesent them to a relative’s house close to the village.

But once the flood hit, his family was forced to take refuge at a makeshift campsite on higher ground outside the village.


More than 33 million people in Pakistan have been affected by the flooding, brought on by record monsoon rains that have swamped a third of the country, causing at least 1,300 deaths.

The floods have destroyed or badly damaged nearly two million homes or business premises, and for the rebuilding process to begin, kilns like those in Aqilpur will have to fire up again.

Earning less than $3 a shift

There are thousands of small brick factories and kilns scattered across much of Pakistan -- a vital supplier of building materials for the nation of 220 million.
For now, mounds of bricks that should be making their way to building sites across the country lie partially submerged in floodwater.

Ayub worked 12 hours a night making bricks, earning less than $3 (600 rupees) a shift for his labours.

He would spend the mornings working the fields surrounding the village, and was only able to sleep briefly in the afternoon before his shift began again.
With the kilns shut down and the fields submerged, his daily wage is gone.

"Where should a labourer go? he asked AFP.

"Wherever the workers go to look for work, they come back empty-handed."

Daily wagers make up one of the poorest segments of Pakistan’s society and many in rural areas are exploited by unscrupulous large-scale farmers and factory owners who keep them in virtual servitude.

The brickworks in particular are notorious for hiring child labour -- illegal under Pakistan law.

One of the youngest among the 50 or so kiln workers camped near Aqilpur is Muhammad Ismail, who joined his father at the brickworks almost a year ago when he turned 12.

After fleeing their home in the flood, Ismail’s father had to borrow money to buy flour and other necessities for his family.
"But now we are in debt," Ismail said.

"I have been searching for work with my father every day. We need to pay off our debt, but I’m losing hope."

It is not uncommon in parts of Pakistan for those who incur debt and fail to pay it back to be forced into bonded labour for years, as interest on the original sum keeps mounting.

This debt can often be handed down from one generation to another.

The kiln workers of Aqilpur have petitioned the owner to spark up the furnaces so they can resume work, but Ayub thinks they are asking for the impossible.
"The water collected here isn’t going to dry up for at least three months," he said.

"And after the water dries, it will take another two or two-and-half months for the repairs."