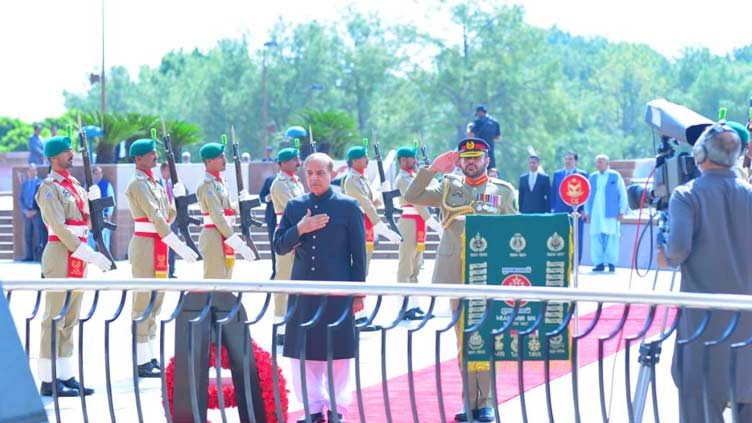 He laid a floral wreath at Yadgar-e-Shuhada to pay tributes to the valiant soldiers of the armed forces.

In his address on the occasion, the Prime Minister said the whole nation salutes its martyrs and ghazis for their indomitable courage and defiance to defeat every wicked assault on the motherland.

He said our brave soldiers resiliently fought to defend every inch of the country 57 years ago on this very day, when an enemy larger in size, crossed international border in the darkness of night to attack Pakistan.

Alluding to the martyrdom of Army officers and jawans in a recent helicopter crash in Lasbella while helping flood victims of Balochistan, the Prime Minister said our armed forces continue to serve the country with the same resilience and never hesitate to give their life and blood for their motherland.

He said today in the wake of disastrous floods in different parts of the country, the nation once again stands united alongside its armed forces to fight and recover from the disaster.

It merits mention that the nation is celebrating its 58th Defense and Martyrs Day today (Tuesday), to remember the courageous war which incurred a shameful defeat to a six times bigger enemy India.

The Defense and Martyrs Day is celebrated every year on September 6th to revitalize the national spirit, remember and eulogize the sacrifices of the martyrs, who spilled their blood for the security of the sacred motherland and marked an exemplary history of patriotism.

Special prayers were offered after Fajr prayers in mosques for progress and prosperity of the country. Fateha and Quran Khawani were also held for the martyrs.

A change of guard ceremony was held at the Mazar-e-Quaid (Quaid’s Mausoleum).

However, the central Defense and Martyrs Day ceremony to be held at the General Headquarters (GHQ) was postponed by the Pakistan Army due to the prevailing floods that wreaked havoc in the flood affected areas of Sindh, Balochistan, Punjab and Khyber Pakhtunkhwa.