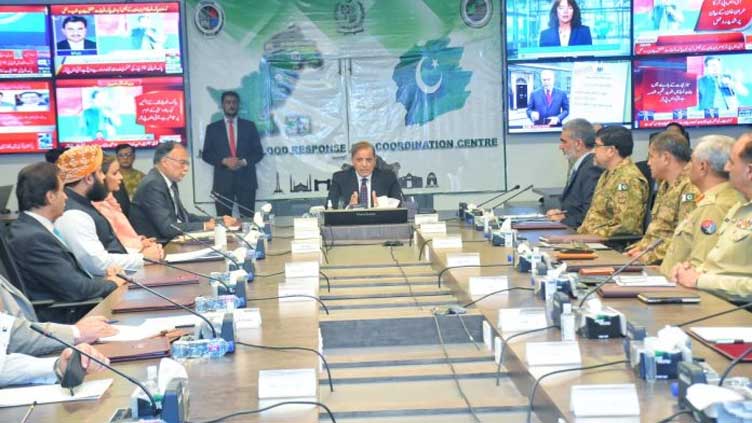 ISLAMABAD (Dunya News) - Prime Minister Shehbaz Sharif on Monday directed the authorities concerned to prepare a robust National Flood Control Plan after due diligence and consulting with international experts in the field.

The Prime Minister also directed the constituting of a committee to present a viable plan for the improvement of the drainage system in the country in order to minimise the damage inflicted by floods in the future.

He gave these directions while chairing the first meeting of the National Flood Response & Coordination Centre (NFRCC) at Earthquake Rehabilitation and Reconstruction Authority (ERRA) Headquarters here.
He said an efficient drainage system and disaster-resistant infrastructure were critical to protecting the country against natural disasters.

The Prime Minister asked the provincial chief secretaries to ensure effective implementation of the zoning laws and regulations on land use in the river bed to avoid any such catastrophe in the future.
The Prime Minister emphasised, "A joint survey by the representatives of the National Disaster Management Authority (NDMA), Provincial Disaster Management Authorities (PDMAs), Pakistan Army Engineering Corp, and provincial revenue departments is being done to ascertain credible data on the scale of losses to life, property, and infrastructure inflicted by the recent rains and floods in all parts of the country in order to expedite and further coordinate various relief efforts being made to address the historic calamity."

Earlier, PM Shehbaz was briefed by the National Flood Response & Coordination Centre (NFRCC) team. He was informed that NFRCC was implementing a three-pronged strategy of rescue, relief, and rehabilitation to effectively minimise the damage caused by the historic rains and floods in the country, especially in Sindh and Balochistan.

It is important to mention that the National Flood Response and Coordination Centre (NFRCC) was set up on the direction of the Prime Minister to coordinate the flood relief efforts of the federal and provincial departments in order to cope with the damage caused by this historic climate change-induced natural calamity.