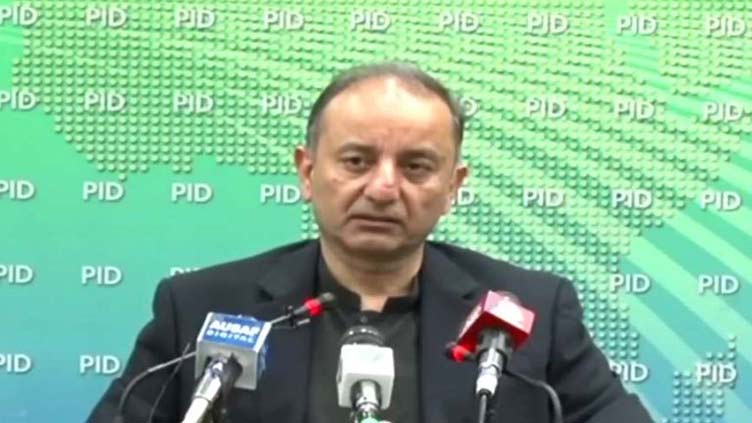 ISLAMABAD (Dunya News) - Federal Minister of State for Petroleum Dr Musadik Malik on Friday said some provinces had been drowned under flood waters and their people were in dire need of ‘healing’, but PTI chairman Imran Khan was busy doing dirty politics in the testing times.

“The flood-affected people are in dire need of remedial measures as their lives and integrity is in danger. But Imran Khan disappointed us by doing politics at this critical juncture and hurling threatening statements in public meetings such as ‘he will not spare’ and ‘he will reveal names’,” he regretted while addressing a news conference here.

The minister said Imran Khan should have the courage to name the people whom he would not spare and reveal the names instead of mere hurling threats.

Will Imran Khan reveal the names of Finance Ministers of Khyber Pakhtunkhwa and Punjab who tried to sabotage the IMF deal on the instructions of Shaukat Tareen, he questioned.

Musadiq Malik said that it was unfortunate that PTI leadership and the workers had run a negative campaign against Pakistan armed forces’ jawans and officers martyred in the helicopter crash in Balochistan.

He criticized the PTI chairman for hiring the services of lobbyist David Fenton in the US, who was known as the founder of the denuclearization programme besides getting money and land from Malik Riaz to protect his money-laundering and receiving millions of pounds from Arif Naqvi, Chief Executive of the Abraj Capital and Investment Company, indicted by the US courts in a range of cases and could get up to 290-year jail.

He underlined that two mega economic scandals were made in the history of the country.

The first was of $250 million by Malik Riaz in Bahria Town, which was as per the Cabinet signed the paper and as per Pakistani representative in the UK who signed the document in the British court; the amount was gifted to Malik Riaz which was one-fourth of the IMF bailout and were deposited in his account.

“It was given in lieu of 400 kanals land which was registered in the name of Imran Khan and his wife,” he added.

The second case, he said was related to Arif Masood Naqvi who was likely to be charged with 290 years imprisonment in the UK against money laundering.

Imran Khan during his regime waived off Rs 250 billion investment to be made by K-Electric in Dattang Coal Project which would have benefited Karachiites.

Besides, he said Imran Khan should be ashamed of ruining state institutions during the PTI government’s tenure with his poor governance and failed policies that caused severe energy as well as food crisis and brought the country to the verge of bankruptcy.

Musadik Malik said it was unfortunate that Imran Khan was doing politics and wanted to create division in public and institutions for personal gains, especially when the country was struggling to manage the widespread life and property damages caused by the unprecedented floods.

He was of the view that the federal and provincial governments and the departments concerned were utilizing all their resources to reduce the suffering of the people to whom the devastating floods rendered homeless.

Dr Musadik said the previous government also violated the commitments made with the International Monetary Fund (IMF) about the subsidies for getting financial assistance.

“The PTI government, as a pre-condition, had signed a contract with the IMF that they will increase the prices and impose petroleum levies and sales tax. But, it violated sovereign commitment with the international financial institutions,” he said.

The minister said the PTI did all this to push the country towards default and bankruptcy for political gains.

The minister said that the government of Qatar had shown willingness to invest $ 3 billion in LNG plants, solar, infrastructure and the establishment of terminals at the country’s ports.

He said that the government had also expedited work on China Pakistan Economic Corridor (CPEC).

He was of the view that the country’s economic direction had been set by the coalition government. “We are determined to strengthen the economic condition of the country”, he added.

To question he said, to meet the gas demand in the upcoming winter, the government had already issued instructions to three companies to purchase LNG.