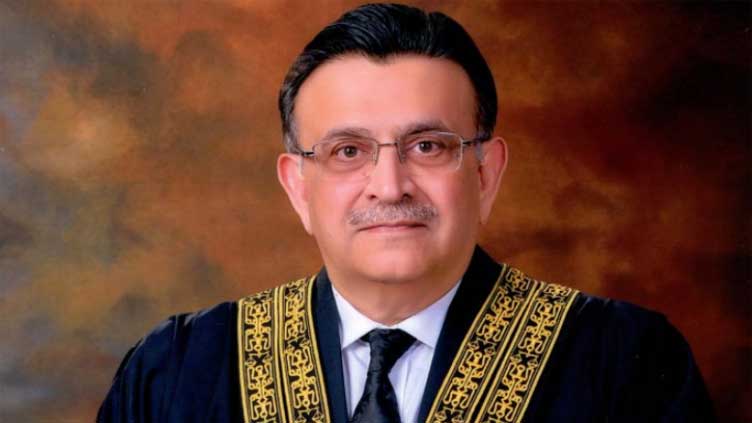 ISLAMABAD (Dunya News) - Chief Justice of Pakistan Umar Ata Bandial on Friday while hearing Imran Khan’s petition against the recent amendments made to the National Accountability Bureau (NAB) law said that those sitting in parliament are making self-serving legislation.

During the hearing, the PTI chairman’s lawyer Khwaja Harris sought more time to submit written arguments. He said he could not submit them on time owing to him having contracted Covid-19.

The CJP clarified during the hearing that the court will only be focused on examining the point of amendments against the fundamental rights and will refrain from interfering in political matters.

It was further added that if the amendments are deriding the process of accountability, it will be a violation of fundamental rights.

The CJP added that most of the amendments have provided relief to the accused, adding that the evidence presented by the plea bargainer has been made inadmissible. He said there was no prohibition against custody in the criminal justice system, but that the matter of arrest varied on the nature of the crime committed.

Makhdoom Ali Khan, arguing on the federal government’s side, stated that the accused are acquitted but their honour is not restored even then. He further argued that the higher judiciary often does not uphold NAB’s punishments.

The CJP said in his remarks that the country is currently undergoing an extraordinary situation, with 150 members of the previous ruling party boycotting the assembly.

“The PTI was told to play a role in the National Assembly, half of their members are instead staging a boycott,” said the chief justice, adding that the members in the assembly are legislating for their benefits.

He furthered that the court does not want to interfere with the process of legislation, and only took suo motu action over intrusion in the investigation. He added that the court was only seeking a record of high-profile cases to see whether the cases were being heard or not.

“The court will support all institutions that are complying with the Constitution. The court is gaining no pleasure from hearing cases under exceptional circumstances,” he said.

Moreover, the CJP said that the supreme judiciary has been critical of the NAB law in its decisions, adding that nowhere in the world is a 90-day remand permitted.

“There is no remand of more than 14 days in criminal cases anywhere. The conviction rate in Japan is 99 per cent,” he said.

The hearing of the case was adjourned till September 1.