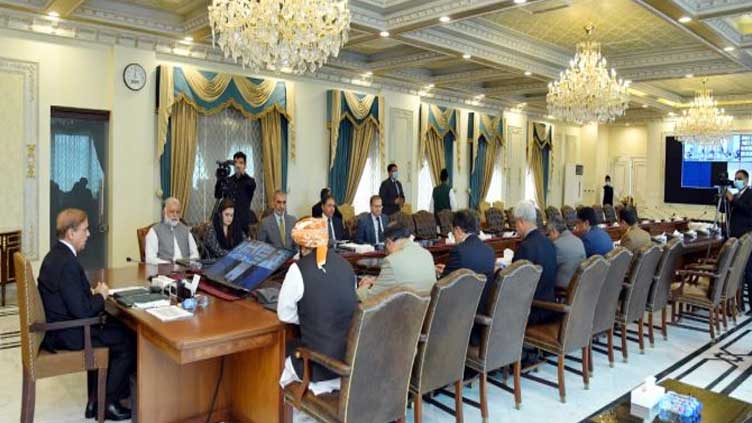 ISLAMABAD (Dunya News) - Prime Minister Shehbaz Sharif on Monday directed to ensure the provision of Rs. 50,000 relief to each flood affected family in the flood hit areas through a transparent process within the three days.

The Prime Minister was presiding over a meeting of the Relief Coordination Committee constituted for the flood affected areas.

The Prime Minister further said that the disbursement of cash relief should be ensured through electronic transfer so that the deserving people get relief.

He directed the Flood Relief Coordination Committee to finalize the process of Rs. 50,000 cash relief disbursement and present its report by today evening.

The Prime Minister said that the joint survey in coordination with the provincial governments for the assessment of flood-related losses should be completed in three weeks instead of five weeks.

The provincial governments should also cooperate and coordinate with NDMA regarding the joint survey at the earliest and to ensure timely relief for the flood affected people, he added.

He also directed the Minister for Information and Broadcasting to formulate a comprehensive awareness campaign in that regard.

The meeting was told that a survey will be conducted in coordination with the provincial governments to assess the damages caused by the recent spell of rains and floods.

It was further told that by the time survey was completed, the government, through BISP, will provide Rs. 30,000 cash relief to each flood affected family.

The Prime Minister, however, directed to enhance the cash relief to Rs. 50,000 for each affected family and disburse the same under the supervision of NDMA.

The meeting was further told that as the federal government was in contact with international donors and other welfare institutions, the Asian Development Bank (ADB) and World Bank have already assured to provide necessary funds for the reconstruction of destroyed infrastructure and rehabilitation activities in the flood affected areas.

Besides, the meeting was told that teams of doctors and paramedics have been sent to the flood affected areas and the Higher Education Commission (HEC) was assessing the damages in affected educational institutions.

Chief Minister Balochistan and Provincial Chief Secretary briefed the meeting in detail about the life and material losses in Balochistan due to recent rains and the rescue and relief measures taken by the provincial government.