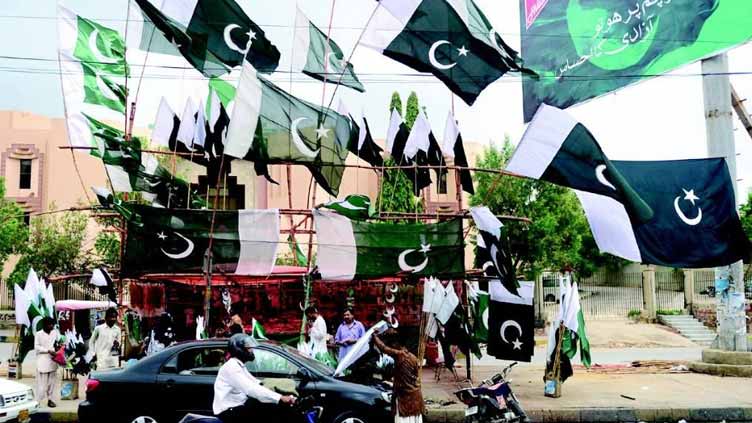 The day dawned with thirty-one gun salute in the Federal Capital.

ISLAMABAD (Dunya News) - Nation celebrates Diamond Jubilee, the 75th Anniversary of Independence Day of the motherland with a renewed pledge to work with the spirit of Pakistan Movement to make the country a true Islamic welfare state.

Public and private buildings as well as streets, bazaars and markets have been profusely illuminated.

National flags, buntings, portraits of founding fathers, posters and banners are also seen everywhere as part of the celebration of Independence Day.

President Dr. Arif Alvi and Prime Minister Muhammad Shehbaz Sharif have congratulated the nation on the 75th Anniversary of Independence Day of Pakistan.

In their separate messages, they said that this day reminds us of the innumerable sacrifices rendered by our founding fathers under the dynamic leadership of Quaid-i-Azam Muhammad Ali Jinnah for carving this homeland "Pakistan" for us.

In his message, Prime Minister Muhammad Shehbaz Sharif said the Day is a watershed moment in our nation’s history.

He said today, we pay rich tributes to Muslims of the sub-continent and express our collective gratitude to them for their heroic struggle, and epic sacrifices for the creation of a new state.

Shehbaz Sharif said establishment of Pakistan is an outcome of the Quaid-i-Azam’s single-minded devotion, unflinching resolve and his unwavering struggle.

The Prime Minister said while celebrating the Independence Day, let us seek guidance from the ideology and thoughts of our founding fathers and put the welfare of our people at the center of our mission of national rejuvenation.

He said let us, vow to turn Pakistan into a nation-state that is reflective of the ideals of our founding fathers.