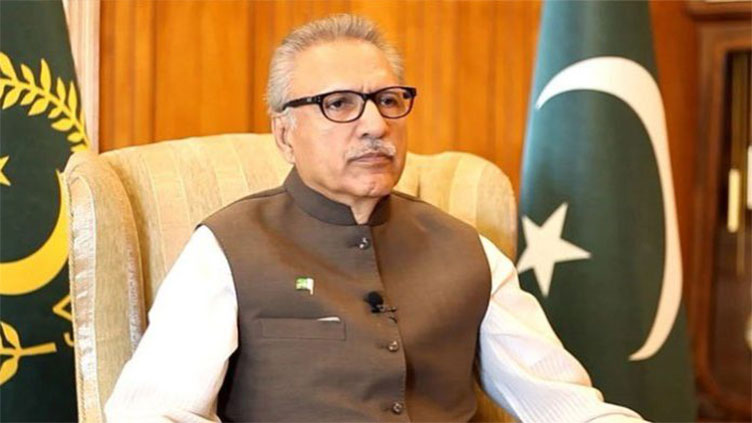 ISLAMABAD (Dunya News) - President Dr Arif Alvi on Friday telephoned the grieved families of the Pakistan Army officer who were martyred in a helicopter crash that took place recently in Balochistan.

The president talked to Captain Ahmed Ali, son of Lt. General Sarfraz Ali Shaheed expressed his condolences to the family.

Admiring him as an upright brave efficient officer and a leader whom he had met frequently, the president said that it was due to these sacrifices that Pakistan stood strong today.

The president talked to Saad, the young son of Brigadier Khalid Shaheed and conveyed his condolences.

He asked him to thank his mother, grandmother and family for the ultimate sacrifice his brave father had given. “Of course, such incidents bring tears to our eyes and pride in brave sons of Pakistan,” he remarked.

President Alvi called Major Asad, brother of Brigadier (Major General to be) Amjad Hanif Shaheed and expressed his condolences to the family. President said he was proud of the “brigadier sahab” and prayed for strength to his family.

He also called and condoled the death of young Naik Mudassar Fayyaz Shaheed who was only 30.

His family was proud of Shahadat and invariably like all Shuhada families said that others were ready.

Talking to the father of Co-pilot Major Talha Mannan Shaheed, the father of two very young sons, the president conveyed his prayers for them and rest of the family.

He said the institution of Armed Forces took good care of Shuhada families.

“Loss is however painful. They will grow up to be proud of their father Inshallah,” he hoped.

The president said the nation was proud of him and his call was meant to appreciate and admire the ultimate sacrifice for his country. He also prayed for strength to the bereaved family.