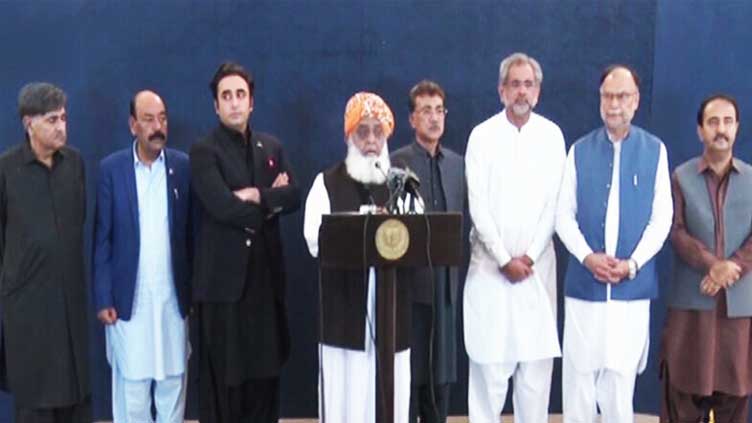 ISLAMABAD (Dunya News) – The ruling alliance announced to boycott the Supreme Court proceedings after the apex court rejected the plea to form a full court bench on petitions related to the recently held Punjab chief minister’s re-election — including a review of its interpretation of Article 63-A.

Pakistan Democratic Movement (PDM) chief Maulana Fazlur Rehman along with other leaders in a press conference said that they suggested the full court bench for the supremacy of justice, the full court was suggested. Unfortunately, the judiciary rejected our demand instead of accepting it.

“If the full court is rejected, we also reject this decision of the judiciary, we will not appear before this bench and we will boycott the case,” he added.

“We also want to say that there is a long history in this political system of such decisions by the judges that have created instability and destroyed the continuation of government policies, which has also created the economic crisis.

“This government wants no institution to interferes in the work that impacts the administrative functioning. Otherwise, we will advise the prime minister and the parliament to legislate so that the public’s trust in courts [could be restored].

The PPP chairman and Federal Foreign Minister Bilawal Bhutto said that this is a unanimous decision of our alliance, adding that court repeatedly interfering in parliamentary affairs.

“This case is about the parliament and when you are giving decisions about an institution, we think your entire institution should sit and decide,” he said seemingly addressing the chief justice.

“Had a full court listened to us then the entire country would’ve accepted your decision.”

PML-N Vice President Shahid Khaqan Abbasi said it was a “test” for the apex court since it was a requirement of justice that a judge or bench recuse themselves from a case in which fingers were raised on them.

“This is done in every court in the world where there is rule of law and the constitution,” he said.

Abbasi said the three judges of the existing bench had the responsibility to decide whether or not the history would accept their conduct.