India a major source of terrorism in region: FO 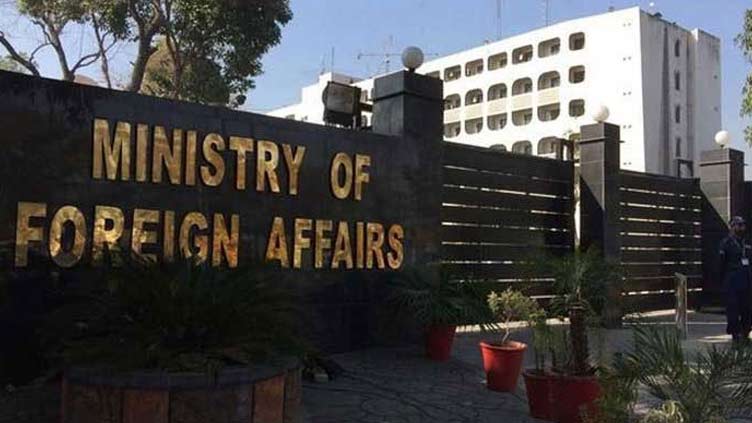 India a major source of terrorism in region: FO

India a major source of terrorism in region

ISLAMABAD (Dunya News) – The Foreign Office spokesperson Asim Iftikhar on Friday said that India had been a major source of terrorism in the region which continued to utilize the scourge as an instrument of state policy.

The spokesperson, in his weekly press briefing, said the terrorism from the eastern neighborhood was mostly directed against Pakistan.

He said that Pakistan had long been informing the international community that under the guise of their presence in Afghanistan, India had been exploiting that situation, to the detriment of Pakistan’s security by financing, aiding and abetting, planning and executing terrorist and subversive activities in Pakistan.

He said Pakistan had shared the situation with key members of the international community, including the P-5, and in the UN system.

He said it was not that whenever there was a dialogue, Pakistan would raise these issues, specifically and strongly and “it is not that we shy away from this dialogue, because we think and it is the factual situation on ground that it is India, which is responsible for this kind of environment in our neighborhood, and we would very much take it up,” he added.

Apprising media about the diplomatic engagements during the week, the spokesperson mentioned the ongoing visit of Secretary General of the Shanghai Cooperation Organization (SCO), Ambassador Zhang Ming which provides an opportunity to engage with the SCO Secretariat and highlight Pakistan’s perspective and priorities for making the SCO mechanisms more effective in advancing shared regional security and economic goals.

He recalled that on July 18, China’s Special Envoy on Afghanistan, Ambassador Yue Xiaoyong, called on Foreign Secretary Sohail Mahmood wherein they exchanged views on the political and security situation in Afghanistan, humanitarian assistance by Pakistan and China to Afghanistan, and other matters of mutual interest.

Coming to Kashmir dispute, the spokesperson said as three years were about to complete when on August 5, 2019, India took illegal and unilateral actions in IIOJK, and subsequent unprecedented and unabated repression and human rights violations in IIOJK.

He reiterated that the government and people of Pakistan continued to stand resolutely with our Kashmiri brothers and sisters in their just struggle for self-determination and freedom from illegal Indian occupation.

He said India’s sinister design of altering the demographic composition of IIOJK in order to forcefully convert the Muslim majority into minority will never succeed.

“Pakistan will continue to sensitize the international community on India’s blatant violations of international law and UNSC resolutions,” he added. To a question about the cypher, the spokesperson said, “the assumptions that are being made and some of the statements that have been made, they are removed from reality. They are baseless.”

Regarding 2022 Global Gender Gap Report by World Economic Forum (WEF), he said Pakistan did not agree with its findings regarding Pakistan as it had flaws with respect to its reporting methodology including data collection, data interpretation, indicator selection, definitions, and standards, etc. He told media that efforts were being made for social, economic and political empowerment of women and gender equality in line with SDG 5.

“Some of the measures include passage of laws; gender responsive policies and budgeting; gender-sensitive social protection social safety-net (BISP); introduction of 30% reserved seats for women representatives at all three tiers of local government; reservation of 60 seats in the National Assembly as well as in Senate and Provincial Assemblies; and 10% reserved quota for employment for women in the Central Superior Services. A brief overview of various data collection mechanisms in Pakistan, including the Economic Survey would demonstrate that women’s equal participation has been steadily increasing in all sectors, from labour to industry, education to arms forces, media to Government employment.”

He told media that Pakistan had been placed in Tier 2 category instead of Tier 2 Watch List in the US State Department’s Trafficking in Persons Report. Pakistan was also not listed in Child Soldiers Prevention Act CSPA designation. “We consider it a positive step taken by the US to remove Pakistan from the said list, as it represents the ground realities and also acknowledges the efforts of Pakistan in this domain,” he added.

About the Monitoring Group’s report, the spokesperson said, Pakistan had been expressing concerns, continuing concerns about Afghanistan as a space from where terrorist activity can originate and can pose a danger to regional and international peace and security.

Regarding the talks with the TTP, he told media that the process was underway which should come up with a way forward, that would be acceptable, that would be, from Pakistan’s perspective in conformity with our position and within the constitutional framework, and would lead to peace and stability.