File reference under Article 6 against me, Imran challenges Govt 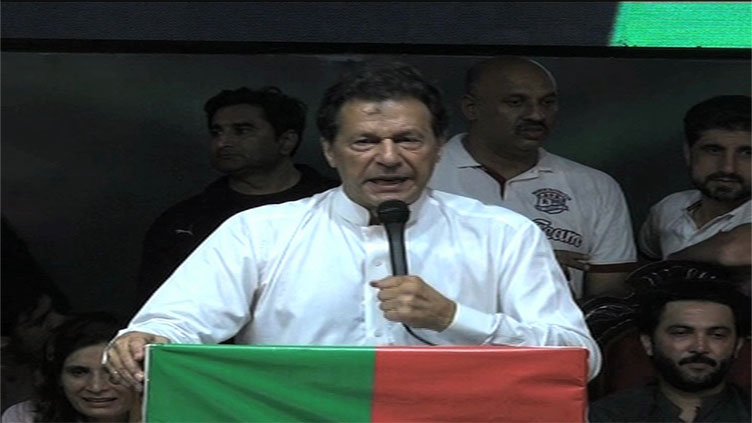 File reference under Article 6 against me, Imran challenges Govt

Imran has challenged the Govt to file a reference under Article 6 of the Constitution against him.

LAHORE (Dunya News) - Pakistan Tehreek-e-Insaf (PTI) chairman and former prime minister Imran Khan on Friday challenged the government to file a reference under Article 6 of the Constitution against him, Dunya News reported.

Addressing a big public meeting in connection with by-elections in Punjab Assembly constituency PP-170 in Lahore on late Friday night, Imran Khan asked the government to file a reference against him under Article 6 of the Constitution as it would provide him an opportunity to reveal everything before the court and the nation about the foreign conspiracy resulting in his ouster from power.

Imran Khan said that a judge of the top court has suggested his trial along with others including President Arif Alvi under Article 6. “File a reference under Article 6 of the Constitution against me. At least this way, I will say it before everyone that how the American slaves (present rulers were imposed on the people of Pakistan with the help of Mir Jafar and Mir Sadiq of Pakistan,” he added.

Referring to the Supreme Court’s detailed verdict on the then NA deputy speaker Qasim Suri’s ruling, Imran Khan said the SC established that there was no conspiracy but questioned how it could say this without any probe.

“The apex court has not probed the threatening letter yet despite President Arif Alvi sent a letter to the chief justice of Pakistan regarding it,” he added.

Imran Khan noted that all surveys have showed that PTI was leading against its opponents in the by-elections while commending the people of Lahore that they have broken the chains of ‘fear’.

He said that global crude prices were lower than when the PTI was in power, and even then the government did not reduce prices further.

The former premier also criticised the ‘turncoats’, saying that the party workers were they ready to beat the ‘lotas’ as they disgrace the people’s mandate by selling their conscience.

“Why should we elect individuals who loot people’s money and shift their fortune abroad,” Imran Khan said, criticising the PML-N leadership over ‘corruption’ references. “I have declared jihad against two families – Sharif and Zardari, and we have to defeat them,” he maintained.

Imran Khan said that the Election Commission of Pakistan (ECP) accepted in the court that it mistakenly declared 4 million dead, adding that the chief election commissioner (CEC) should step down after this. He alleged that Mr X has prepared 15,000 to 20,000 bogus votes in every constituency to rig the elections.

He further said that the US “imposed” the current rulers on Pakistan as it wanted a “yes man” in power. “Do you think the US wants to see a progressive Pakistan? Certainly not,” Imran added.

Nation will never forgive those who bring  two families  into power: Imran Khan

Earlier, Pakistan Tehreek-e-Insaf (PTI) chairman and former Prime Minister Imran Khan on Friday said that nation will never forgive those who brought the two families [Sharif and Zardari] into power through conspiracy, and the US will use the incumbent government like ‘tissue paper’.

“The US wants such leadership in the country that follow its order and they brought them to the power for its own use,” Imran said.

“We want good relations with everyone including the United States but no one’s slavery is acceptable,” he added.

He said the ruling PML-N has come to know through different surveys that PTI is going to win all 20 seats in the by-elections in Punjab so they will rig the election badly.

“On July 17, PTI will badly defeat the turncoats and the two families who are ruling for 30 years,” the former PM said.

Imran Khan directed his party workers to guard every polling station on the polling day of the by-elections in Punjab till getting the final results on Sunday.