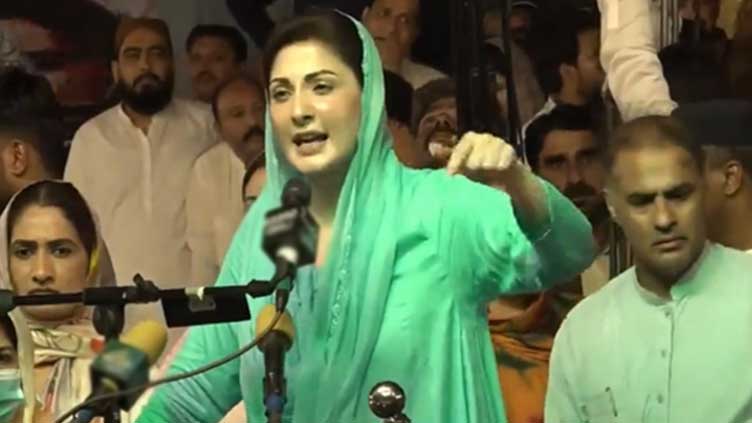 Addressing a public rally in Multan ahead of Punjab by-elections, she flayed Pakistan Tehreek e Insaf (PTI) Chairman Imran Khan and said that there is no greater crime than the one who uses religion in politics.

She also lashed out at PTI Chairman and went on to say that he also played the religious card.

Maryam went on to say that yesterday, Shehbaz Sharif announced the reduction in POL prices, and today Nawaz Sharif said that the prices of POL products will be further slashed if the prices in the world market decrease.

She further said that PTI Chairman talks about the US conspiracy while the SC has cleared the air over the foreign conspiracy.

“Under the umbrella of a foreign conspiracy, Imran Khan has tried to spread anarchy and mischief,” Maryam added.

She took a dig at the former premier and said that half of his cabinet of Imran was imported.

Earlier, adressing a rally in Lahore, Maryam Nawaz on said that July 17 will be a day PML-N’s victory.

Maryam claimed that Lahoriites had survived a difficult period and predicted that the nation will experience good news as time went on.

While applauding the Punjab CM performance, Maryam said during the occasion of Eid, Punjab CM Hamza worked day and night and cleaned the roads of the cleaned the city within 24 hours.

Maryam lambasted the PTI leadership and went on to say that the opponents will be chased away from the field and those who have a bad eye on Lahore will have to return with disappointment.

“Imran Khan himself was the biggest puppet and he had kept Usman Bazdar as a puppet and now he begging the votes from the person about which in past he used to say that the biggest dacoit,” Maryam said while lashing out at Imran Khan.