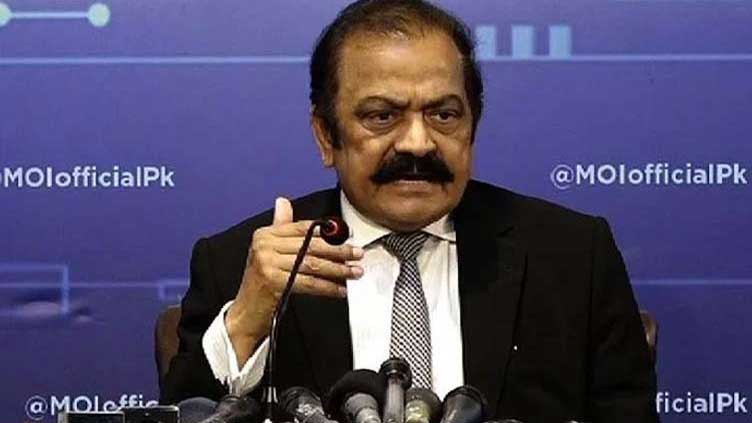 Addressing a news conference in Islamabad, Rana Sanaullah said that the decision of the Supreme Court raised the head of the Constitution, adding that the Constitution of Pakistan is the sacred trust of the people.

He said there is no greater crime than this, adding that its punishment is also mentioned in Articles 5 and 6.

He said, “We will not keep the option of fraud and violation of the constitution open”. Rana Sanaullah went on to say that the work has started regarding sending references.

Rana Sanaullah said the order of the Supreme Court will be carried out, adding that the reference is made after the decision.

Rana Sanaullah said the President and former prime minister, speaker, and deputy speaker committed fraud with the Constitution of the country, adding that the decision of the Supreme Court is final, it is a commendable decision, punishment for breaking the Constitution.

Interior Minister said, “I am ready to arrest Imran Khan on the punishment of the violation of the constitution”.

He said that if the cabinet allows him to file a case, the government will arrest him. Now, after the verdict, a major crime has been committed, adding that there will be a reference or arrest.

He said the government intended to arrest Sheikh Rashid during the long march, but it did not find him (Sheikh Rashid) despite all the efforts.
In a news conference, Rana Sanaullah said that the country has to abide by the constitution, what the Supreme Court has said is true, and what Fawad Chaudhry is saying is not true.

Interior Minister said that Nawaz Sharif s sentence is wrong, adding that the Punjab government had sent Nawaz Sharif out after suspending his sentence.

He said that if the country is to be run under the constitution and law then action has to be taken, adding the matter will be discussed in the cabinet meeting tomorrow.

Interior Minister went on to say that in his personal opinion, reference and action should be taken after this decision.
He said: “The Speaker can send an immediate reference against them. Our coalition government is the one that makes decisions through consultation.”

Rana Sanaullah replied regarding his case that Shehryar Afridi had taken a wrong step, the real culprits were Imran Khan and Shahzad Akbar.

He said that the attacker of Absar Alam was caught from Sheikhupura, adding that the arrested person himself had said that he had attacked Absar Alam. The person who was arrested was the facilitator, not the real accused.