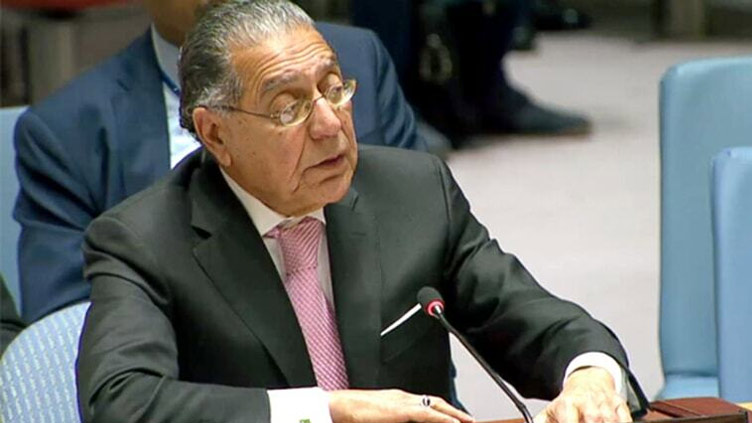 Pakistan is the current chairman of G-77 and China.

LISBON (Benjamin Kilmister-Bland) - Pakistan, speaking on behalf of the “Group of 77” (developing countries) and China, Thursday called for “focused” international efforts for capacity development regarding marine science and research, especially for scientists from the most vulnerable countries, in a bid to restore ocean health.

“With sea levels rising, coastal erosion worsening, enhanced marine pollution, and the ocean becoming warmer and more acidic, there is no doubt that marine science has assumed critical importance in helping to understand, predict and respond to natural and anthropogenic events and promoting the sustainable development of the oceans and seas,” Ambassador Munir Akram told a panel of the UN Ocean Conference being held in Lisbon, Portugal.

“Yet,” he said, “the vast disparities in terms of financial, technological and human resources, in particular between developed and developing countries, will be a critical bottleneck to achieve progress towards achieving many targets of SDG (sustainable development goal) 14,” which is aimed at protecting marine and coastal ecosystems from pollution, as well as addressing the impacts of ocean acidification.

Pakistan is the current chairman of G-77 and China, which now has 134 members and is the United Nations’ biggest intergovernmental group of emerging countries.

In his remarks, Ambassador Akram, who is the permanent representative to Pakistan to the UN, also called for investing in people and their institutions so that they can build infrastructure and long-term support networks with better access to data, tools and technologies.

Transfer of marine technology on preferential terms to developing countries to contribute to the protection of the marine environment was also essential, the G-77 chairman said.

Also, he underscored the need for supporting developing countries in addressing their constraints in accessing technology, including through strengthening science, technology and innovation infrastructure, domestic innovation capabilities, absorptive capacities and the capacity of national statistical systems, in particular in the most vulnerable countries.

In addition, Ambassador Akram recommended enhancing cooperation at the global, regional, sub-regional, national and local levels in order to strengthen mechanisms for collaboration, knowledge-sharing and exchange of best practices within marine scientific research, including through south-south and triangular cooperation

“We believe that it is only through a revitalized global partnership, aimed at enhancing research capacity and facilitating the transfer of technology to the most vulnerable countries, that the international community can achieve all the targets of SDG 14,” the G-77 chairman added.