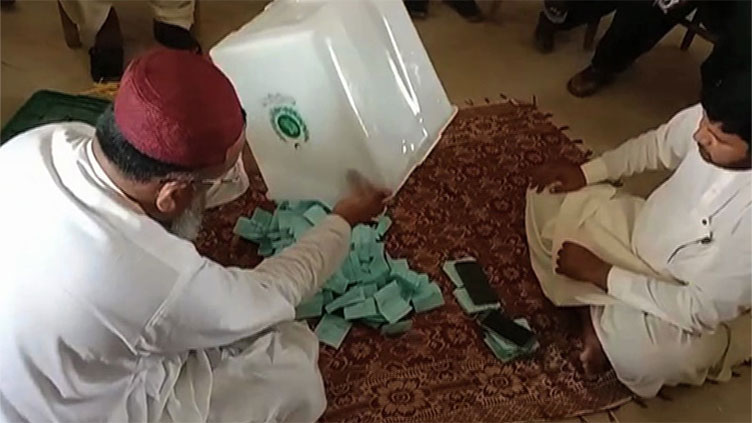 As per unofficial results of 2,455 seats out of total 6,277 seats announced so far, the PPP is leading with 2,288 seats. Grand Democratic Alliance (GDA) is second with 65 seats while Jamiat Ulema-e-Islam-Fazl (JUI-F) is third with 43 seats.

According to unofficial results, Independents are fourth with 40 seats. Pakistan Tehreek-e-Insaf managed to get 13 seats so far. In Sindh LG polls 946 candidates have been elected unopposed.

The polling began at 8:00am and the ended at 5:00pm but in several districts polling was stopped due to clashes.

In Sindh LG polls 946 candidates have been elected unopposed while out of 6,277 seats, results of more than 2,455 have been received, according to which PPP is at the top, GDA is second, JUI is third, Independent is fourth and PTI is on the fifth spot.

According to the complete unofficial result of Municipal Committee Ward No. 3, PPP candidate Tariq Hussain Brohi won with 272 votes and the independent candidate Dilawar Khan Khoso came second with 147 votes.

According to the unofficial and unconfirmed results of the polling station of Ward 11 of Town Committee Kandiaro, Akram Qureshi of PPP won with 650 votes and the JUI-F candidate Ataullah came second with 550 votes.

According to the unofficial preliminary results of Town Committee Ward No. 6, independent candidate Irfan Khurshid won with 384 votes, while PPP’s Barkat Korai came second with 203 votes.

According to the unofficial results of Ward 6 of the Municipal Committee, JUI-F candidate Raja Ram won with 147 votes, while PPP candidate Abdul Jabbar Sheikh came second with 83 votes.

PPP took most of the seats in Khipro. PPP won in 13 out of 18 wards of Town Committee Khipro.

The PPP completed a clean sweep in Birani and registered victory in all the five wards of Birani Town Committee.

According to the complete unofficial results of Municipal Committee Ward No. 3, Jan Alam of PPP won with 630 votes.

According to the complete unofficial preliminary results of Town Committee Ward No. 2, the PPP-backed candidate Sajid Aziz won with 853 votes, while the Tehreek-e-Labaik (TLP) candidate came second with 150 votes.

Kandhkot: Clashes erupted between JUI-F and PPP workers in ward 10. Thirty people were injured as they attacked each other with sticks while several vehicles also got damaged.

Nawab Shah: Polling was stopped due to a commotion at Nadir Shah Dispensary polling station. The TLP candidate and voters protested over the missing voting symbol of TLP on the ballot paper.

During the local body elections in Sindh, a man was shot dead at Dabar polling station in Rohri while a man was killed in Tando Adam.

Election postponed in few wards over misprinting of ballot papers

The local body elections were postponed in a few wards due to misprinting (typographical error) of the names of candidates in the ballot papers confirmed a spokesperson of the ECP.

He maintained that the ECP will issue a new schedule for elections on the seats. The spokesperson said that the ECP has launched an inquiry in this regard.

According to the ECP, the total number of registered voters in the 14 districts of Sindh was over 11.4 million and the election commission had printed 2,950,000 ballot papers for the first phase of the LG polls.

Government had deployed over 40,000 policemen across polling stations to maintain law and order while Sindh Rangers were also on standby. Carrying of any kind of weapons was also prohibited under section 144.

It is worth mentioning here that at least 946 candidates from 14 districts had been elected unopposed while at least 21,298 candidates were in the field against 5,331 seats.