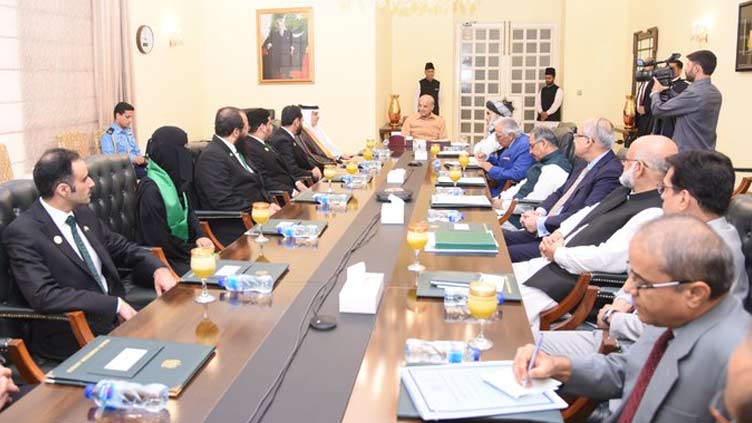 ISLAMABAD (Dunya News) – Prime Minister Shehbaz Sharif has expressed the hope that  Road to Makkah  initiative will be extended to other cities of Pakistan in future to facilitate pilgrims intending to perform Hajj.

Talking to  Road to Makkah  project team led by Ambassador of Saudi Arabia Nawaf bin Saeed Ahmad Al-Malkiy in Islamabad today [Thursday], the Prime Minister expressed his satisfaction that thousands of Pakistani pilgrims would be facilitated under this initiative.

Thanking the Saudi leadership for  Road to Makkah  project, he assured full cooperation and support to the Saudi Team for making the initiative a great success.

The Prime Minister reaffirmed that Pakistan and Saudi Arabia enjoy historic fraternal relations, which are marked by common understanding on all issues of mutual interest at regional and international level.

He shared that the people and leadership of Pakistan hold the Custodian of the Two Holy Mosques in high esteem, and conveyed warm greetings to His Majesty King Salman bin Abdulaziz and Crown Prince Muhammad bin Salman.

While recalling consistent support of the Kingdom to Pakistan, he stated that the two countries have stood with each other through the vicissitudes of time.

Thanking the Prime Minister for his Government s assistance to the Saudi Team for the effective implementation of the initiative, the Saudi Ambassador expressed the desire to further strengthen bilateral cooperation between the two countries, especially in the realms of trade, development and investment.

Mansour Shahad S. Alotaibi from the Saudi Department of the General Directorate of Passports was also present in the meeting.

It is pertinent to mention that  Road to Makkah  is a Saudi initiative aimed at the completion of Saudi immigration and customs-related formalities before the departure of the pilgrims to perform Hajj, at the Islamabad International Airport. The Saudi Team is in Pakistan for the facilitation of such pilgrims, prior to their departure to the Kingdom.