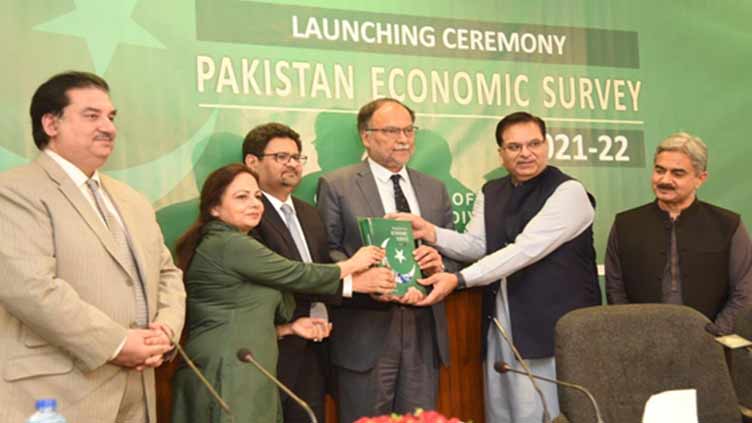 Among others, the launching ceremony was attended by minister for Planning, Development and Special Initiatives, Federal Minister for Power, Khurram Dastigir, State minister for Finance and Revenue, Aisha Ghaus pasha and other government officials.

The pre-budget document shared the key economic indicators and the performance of different sectors of the economy during the fiscal year 2021-22.

Launching the Economic Survey at a ceremony in Islamabad on Thursday, Finance Minister Miftah Ismail has vowed to lead the country towards responsible, sustainable and inclusive growth. He said the imminent default has been averted due to the difficult decisions taken by the present government. He said the country has now been put on the path of stability.

Miftah Ismail stressed the need for putting the country in the right direction. He said we have to increase the prices of petroleum products the Brent price is hovering around 120 to 123 dollars per barrel.

The minister pointed out that the country would not have been faced with the current price hike had the previous government signed long term agreements for gas import during the period of Covid-19.

He said the PTI left behind landmines not for the present government but the State of Pakistan.

As regards the Foreign Direct Investment, the Finance Minister said these were two billion dollars in 2017-18 and today this has come down to 1.25 billion dollars in the first nine month of current fiscal year. He said Pakistan lags behind in every statistics because of the decision of the incompetent government of PTI.

Miftah Ismail said Pakistan will have to import three million tons of wheat this year to meet domestic requirements.

Economic Survey at a glance

Speaking on the occasion, Minister for Planning and Development Ahsan Iqbal said government will make all out efforts to increase development budget of the country.

He said in the next fiscal year Public Sector Development Program will focus on protecting water resources. He said under construction dams will be completed on fast track basis.

Highlighting government s focus on CPEC projects, Ahsan Iqbal said projects under China Pakistan Economic Corridor will be completed speedily. He said Special Economic Zones under the CPEC will be constructed which were ignored by previous government. He said upgradation of ML-1 is an important project which will also be completed.

He said government will also take steps to improve physical infrastructure of the country.

On the other hand, Minister for Energy Engineer Khurram Dastgir said that PML-N government set up coal power plants as coal price was less than other fuels in 2013. He announced that future energy projects will be established while utilising local fuel.

Khurram Dastgir said boilers of power plants are being replaced to consume local coal from Thar Coal, and hoped that cheap energy will be available after opening of new blocks in the Thar Coal.

To a question, Minister for Planning Ahsan Iqbal said the Prime Minister is ambitious about fast track growth of economy. Replying to a question, Finance Minister Miftah Ismail said that salaries of all employees will be increased in the budget.