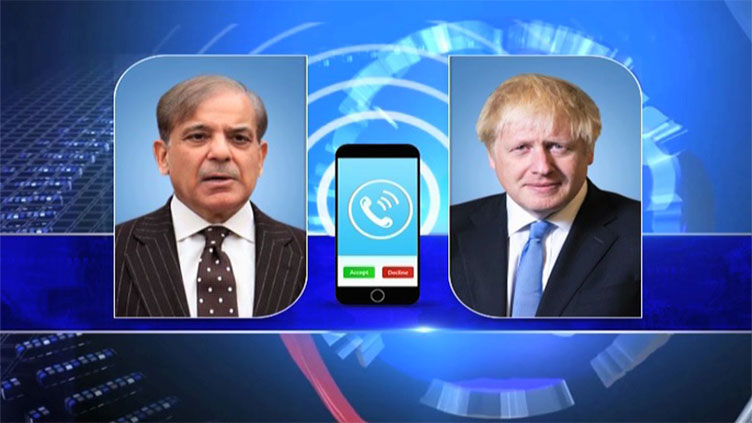 Shehbaz reiterated Pakistan's desire to bolster its ties with the UK across diverse fields.

ISLAMABAD (Dunya News) - Prime Minister Muhammad Shehbaz Sharif has reiterated Pakistan s desire to bolster its ties with the UK across diverse fields, with a special emphasis on an enhanced trade and investment partnership.

In a telephonic conversation with British Prime Minister, Boris Johnson on Monday, he said Pakistan highly valued its relations with the UK, which are based on historical linkages and convergent interests on a broad range of issues.

Highlighting the long-standing Pakistan-UK ties, the Prime Minister appreciated the positive role played by 1.6 million Pakistani Diaspora in forging closer links and building bridges between the two countries. He further emphasized the need to strengthen cooperation in the field of legal migration to fully realize the potential.

He extended felicitations to UK on platinum jubilee celebrations of Her Majesty The Queen s coronation. Both leaders emphasized the importance of celebrating the 75th anniversary of establishment of Pakistan-UK diplomatic relations in a befitting manner.

Shehbaz Sharif underscored the importance of Pakistan-UK Enhanced Strategic Dialogue (ESD) and suggested to develop 10-years roadmap for taking relations forward in diverse fields. He stressed the ESD should deepen mutual engagement and the bilateral partnership elevated to the next level. He also appreciated the work undertaken by the UK in promoting education, health and other social sectors in Pakistan.

In the regional context, Shehbaz Sharif underscored the importance of peace and stability in Afghanistan and the need to scale up efforts to avert the humanitarian crisis. He said that the international community s constructive diplomatic and political engagement with the Interim Afghan government was vital for sustainable peace and stability. He also underscored the importance of release of Afghanistan s frozen assets to bring stability to the fledgling Afghan economy.

Prime Minister Boris Johnson conveyed his government s deep appreciation for Pakistan s cooperation with UK, particularly with regard to evacuations in the aftermath of developments in Afghanistan post-15 August 2021.

The Prime Minister highlighted the grave violations of human rights in the Indian Illegally Occupied Jammu and Kashmir (IIOJK). While reiterating Pakistan s commitment towards promotion of peace in the region, he stressed the importance of peaceful resolution of the Jammu and Kashmir dispute. He also underscored the need for maintaining strategic balance in the South Asian region.

Both Prime Ministers also exchanged views on the situation in Ukraine and other matters of mutual interest.

Prime Minister Johnson reiterated his felicitations to Prime Minister Shehbaz Sharif on his election and assumption of office and underlined UK s desire to further enhance its bilateral relationship with Pakistan.