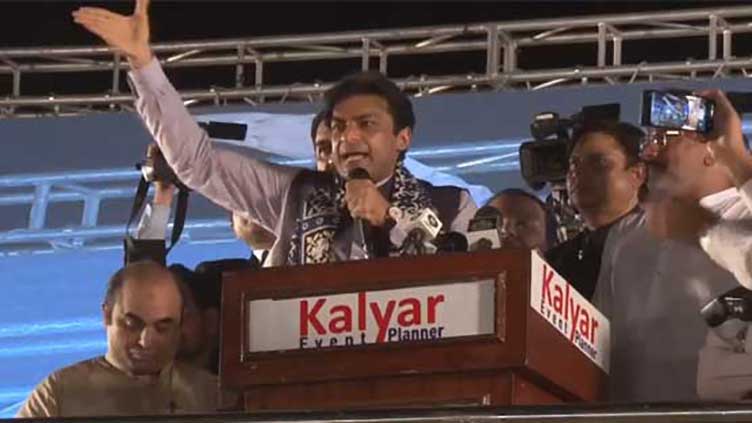 BAHAWALPUR (Dunya News) - Punjab Chief Minister Hamza Shahbaz Sharif on Saturday said that if Imran Khan tried to riot again after six days, we will send him to jail.

Addressing a rally in Bahawalpur alongside Maryam Nawaz, Punjab CM welcomed the crowed at the rally and said that on the occasion of Youm-e-Takbir, people who came out despite the intense heat have proved themselves to be true soldiers of PML-N.

He added that during PTI’s protest in Islamabad Qasim Suri asked Imran Khan to give ‘Islamic touch’ to his speech. The PML-N leader explained that this exposed the real face of Imran Khan and his party, as they have been using the religion card to fulfil their political agenda.

The Punjab CM further added that there is a problem of water shortage in Cholistan. The PML-N leader expressed that he is aware of the situation in Cholistan and said animals died due to lack of water in there.

He further stated that the constitutional crisis has been haunting Punjab for two months now. The Punjab CM warned Imran Khan of the consequences if he tired to create a chaotic situation in the country again. Now the ‘touch of jail’ is left in the story, you will be sent to jail.

Imran Khan will have to go to jail if he tried to spread chaos again, said Hamza Shahbaz.