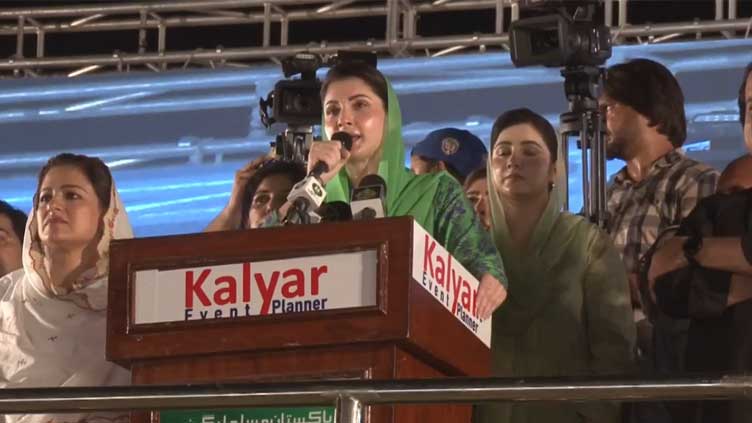 BAHAWALPUR (Dunya News) - Pakistan Muslim League-Nawaz (PML-N) Vice President Maryam Nawaz while urging the Supreme Court (SC) to stay away from the ongoing political scuffle said that the SC must stay away from [Imran Khan] the seditionist and remain neutral.

Addressing a rally in Bahawalpur, the PML-N Vice President said that I thank the people from the bottom of my heart, thank you for attending the rally in such scorching heat. Criticizing the PTI Chairman, Maryam said that Imran Khan has given nothing to the country but poverty, inflation and promoting inappropriate conduct. She challenged Imran Khan to point out his single contribution to the country.

Pakistan was banned from carrying out nuclear blasts, threats were hurled that if you carry out nuclear explosion, you will be pushed into the Stone Age. Nawaz Sharif told them to do whatever they want, he was eager to fulfil the national task. My leader did not wave a letter, did not pretend of a conspiracy, she said.

Maryam explained that only those who love their homeland can make such a contribution to secure the country’s borders. she also mentioned that Nawaz Sharif removed the darkness of load shedding from this country. She called out to Imran Khan asking that Nawaz Sharif has served the country day and night, what have you done for Pakistan?

The PML-N Vice President further said that at present Pakistan has no fear of external security, today the country is suffering from internal turmoil and sedition. She termed Imran Khan to be the reason behind the chaotic situaton in the state.

The Punjab Chief Minister Hamza Shahbaz Sharif said that if Imran Khan tried to riot again after six days, we will send him to jail.

Addressing the rally in Bahawalpur alongside Maryam Nawaz, Punjab CM welcomed the crowed at the rally and said that on the occasion of Youm-e-Takbir, people who came out despite the intense heat have proved themselves to be true soldiers of PML-N.

He added that during PTI’s protest in Islamabad Qasim Suri asked Imran Khan to give ‘Islamic touch’ to his speech. The PML-N leader explained that this exposed the real face of Imran Khan and his party, as they have been using the religion card to fulfil their political agenda.

The Punjab CM further added that there is a problem of water shortage in Cholistan. The PML-N leader expressed that he is aware of the situation in Cholistan and said animals died due to lack of water in there.

He further stated that the constitutional crisis has been haunting Punjab for two months now. The Punjab CM warned Imran Khan of the consequences if he tried to create a chaotic situation in the country again. Now the ‘touch of jail’ is left in the story, you will be sent to jail.

Imran Khan will have to go to jail if he tried to spread chaos again, said Hamza Shahbaz.