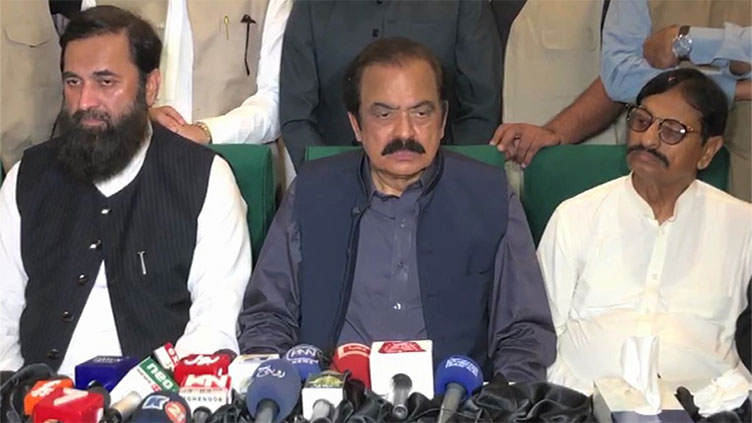 Rana Sanaullah said government was not afraid of threat for long march call by Imran Khan.

ISLAMABAD (Dunya News) - Federal Minister for Interior Affairs Rana Sanaullah on Sunday said that the government was not afraid of threat for long march call by Imran Khan.

He said the  incompetent coterie  has lost support of its every allied political party and making hue and cry alone now by making nation fool, especially youth.

He said the Pakistan Tehreek-e-Insaf (PTI) always used to say that they will remain non-violent during long march but the government does not believe this statement as he was known  master of U-turn .

He said the PML-N government will not accept the agreements of PTI with International Monetary Fund on difficult terms and it will take confidence all allied parities about the new agreements.

Peaceful protest everyone s right, will not allow taking law in hand: Sanaullah

Federal Interior Minister Rana Sanaullah while reacting to date of PTI’s Islamabad long march announced by Imran Khan, said no one will be allowed to take the law into their own hands and peaceful protest is everyone’s right.

Talking to media in Bahawalpur, Rana Sanaullah said that the coalition leaders will decide whether the long march should be allowed to come to Islamabad or not. If it is decided to stop, they will not be allowed to leave their homes adding that May 28 is Youm-e-Takbir. If Pakistan had not become an Islamic nuclear power, the enemy would have subdued us, Rana said.

"I came here to review preparation for the May 28 rally", he added.

The Interior Minister mentioned that Prime Minister Shehbaz Sharif, Maryam Nawaz will address the public gathering, but if conditions are not right then Hamza Shehbaz will take the lead.

He further said that we have not yet affiliated with anyone for the election at the time. We wanted to go to the polls. The country is on the verge of chaos.

The united coalition has decided that the government should fulfill its constitutional term, he said.