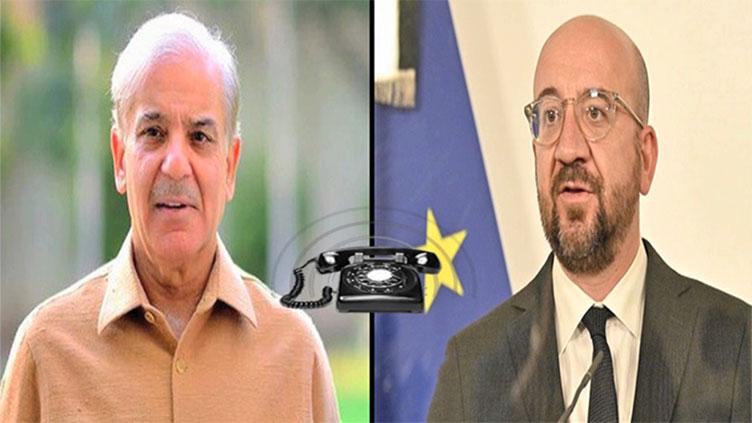 PM Shehbaz received a telephone call from the President of the European Council, Charles Michel.

The Prime Minister expressed these views as he received a telephone call from the President of the European Council, Charles Michel.

While recalling his earlier conversation with President of the European Commission, Ms. Ursula von der Leyen, he expressed satisfaction over the current trajectory of Pakistan-EU bilateral exchanges and growing cooperation.

The Prime Minister also recalled Pakistan’s long-standing and highly fruitful economic and trade cooperation with the EU, including through the application of the GSP Plus facility, which had enabled Pakistan to enhance its trade with the EU, a press release issued here by the PM Media Wing said.

He also spoke of his confidence that the Pakistan-EU Strategic Engagement Plan, which was an important mechanism between Pakistan and the EU, would help deepen bilateral engagement between the two sides, especially in the realms of trade, development and climate change.

On Afghanistan, the Prime Minister stressed the importance of a peaceful and stable Afghanistan, while also highlighting its importance and urgency of taking necessary steps to avert humanitarian and economic crises in that country.

On Ukraine, he spoke of his concern that the ongoing conflict had implications for the developing countries, while reaffirming Pakistan’s principled position on the issue.

The Prime Minister urged the international community to remain engaged in the search of a diplomatic solution to the problem in accordance with the relevant multilateral agreements, international law and the UN Charter.

He highlighted the serious situation in the Indian Occupied Jammu and Kashmir (IIOJK).

Underlining Pakistan’s commitment to promote peace in the region, including with India, the Prime Minister stressed that peaceful resolution of the long-standing Jammu and Kashmir dispute, in accordance with the UNSC resolutions and the wishes of the Kashmiri people, was indispensable for sustainable peace and security in South Asia.

The Prime Minister also extended a cordial invitation to the EU Council President to visit Pakistan, at an early date.