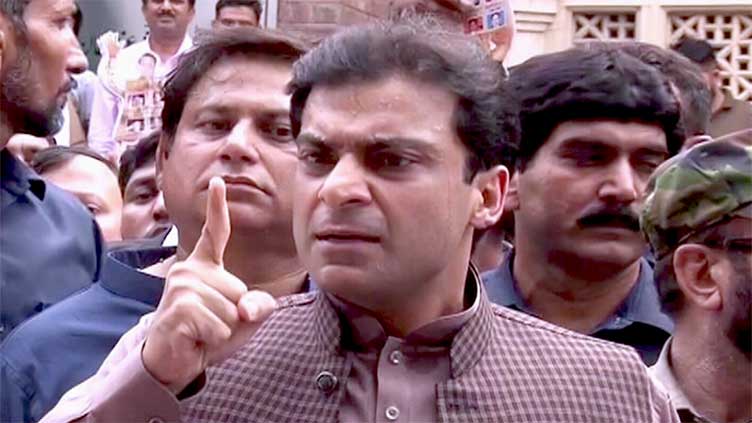 LAHORE (Dunya News) - Chief Minister Punjab Muhammad Hamza Shahbaz has asserted that those involved in scurrilous attacks against the state institution will have to be answerable. One should take the liberty to say anything offensive about the institutions according to his own desire and will. A defeated person is ridiculing the state institutions, constitution and the security of the country.

While talking to the media at the residence of Mian Naveed MPA in Pakpattan, the CM argued that the steps and statements of Imran Niazi are against the security of the country. Even the friendly countries have become a victim of his vitriols and as a result, they have distanced themselves from Pakistan due to Imran Niazi; he regretted and pointed out that Imran Niazi, who claimed to become an advocate of Pakistan and Kashmir cause, has miserably failed to fulfil his commitment.

Imran Niazi will have to be answerable for all his sins very soon, he stated.

What has been done during the last four years, except taking revenge, and creating chaos in the country while fake promises were made with the youth about employment and a circus going on in Punjab? The Punjab governor has played havoc with the constitution, he commented.

To another question, the CM maintained that the price hike has made people mentally sick. The government is trying to create ease in the lives of the common man and a public welfare agenda would be brought out within the next few days. A decrease in the prices of edibles would be the first part of this agenda; he disclosed and added that the murder of the father of Mian Naveed would be investigated and criminals would be taken to task.

Earlier, the CM visited the residence of PMLN MPA Mian Naveed Ali Arain and condoled with the bereaved family. He offered fateha for the departed soul and assured that the requirements of justice would be fulfilled. Senior politician Ata MAnika, MPAs namely Kh. Salman Rafique, Kh. Imran Nazir, Majid Zahoor, Imran Goraya and party workers were also present. The CM also went to the shrine of Hazrat Baba Fareed-Uddin Masood Ganj Shakar (RA). He laid the floral wreath and prayed for the welfare and propensity of the country. The CM also offered Nawafil in Masjid-e-Aulia and inspected various sections of the mausoleum.

Talking on this occasion, Hamza Shahbaz pointed out that the promotion of brotherhood, harmony and tolerance was the gist of the teachings of various Sufi Saints. There is a need to promote their traditions as Islam was spread in the Indo-Pak sub-continent through Sufi Saints and religious leaders. The religious leaders have further promoted the message of Islam and one feels spiritual contentment at the shrines of Sufi Saints, he added. Hamza Shahbaz inspected various sections of DHQ hospital Pakpattan and inquired the patients and their attendants about the facilities. He directed to move a little girl, sitting in the waiting area, to the emergency ward for treatment without delay.

Talking on this occasion, the CM disclosed that the 2nd shift of the hepatitis clinics would be started soon. Provision of the best medical facilities to the people is my mission and I have inspected hospitals in various districts during their visits. I have issued instructions to provide free medicines and every hurdle in the provision of the best healthcare facility in hospitals would be removed, he vowed.

The cleanliness and other arrangements would be improved and no leniency would be tolerated in the provision of the best medical facilities in hospitals; he added and emphasized that free and best treatment is the right of every citizen. Kh. Salman Rafique, Kh. Imran Nazir, Mian Naveed Ali Arain, Imran Goraya and others were present.

The CM held meetings with parliamentarians and party workers to discuss the political situation and development projects. He assured that the problems of Pakpattan and adjoining areas would be resolved. Emergent steps are being initiated to provide relief to the masses and good officers would be posted on merit, he concluded. MPAs namely Kh. Salman Rafique, Kh. Imran Nazir, Majid Zahoor, senior politician Ata Manika, Imran Goraya and party workers were also present.