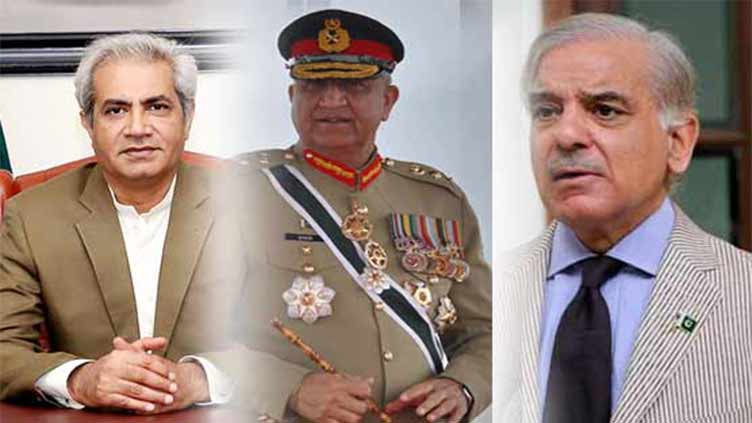 LAHORE (Dunya News) – Governor Punjab Omar Sarfraz Cheema in a letter written to Prime Minister Shehbaz Sharif said that you created political crisis by unconstitutional use of power and Hamza Shehbaz took unfair advantage of being your son.

A letter written by Punjab Governor Omar Sarfraz Cheema to Prime Minister Shahbaz Sharif about the political crisis and constitutional stalemate in Punjab stated that no force can stop him from stopping illegal things.

According to the text of the letter, the Governor of Punjab said that the unconstitutional and illegal forgery of the Chief Minister has taken the province hostage and has officially informed the Prime Minister of Pakistan and the heads of other constitutional bodies about the situation.

Cheema further stated in the letter that he was aware of the political and legal impasse in the province and consider it his responsibility to inform you of some important reasons in this regard. He said Usman Buzdar s resignation as Chief Minister is controversial and the PML-N won the disgusting support of de facto members for a majority in the Punjab Assembly, while members of parliament who changed allegiances were presented to the media.

The Governor Punjab further wrote in the letter that the Lahore High Court (LHC) has been moved for the disputed election of the Chief Minister, adding that the main figure in all this unconstitutional process is Hamza Shehbaz, who has taken advantage of being the son of the Prime Minister.

The Governor Punjab stated that the Punjab Assembly Secretariat had also sent him report on CM s disputed election and the Secretary Assembly informed about the legal violations related to fraudulent elections in the report, while media also showed controversial election to the world and Advocate General Punjab also declared the election of Chief Minister illegal.

The Governor in his letter stated that the recent election is a black mark on the 100 year history of the Punjab Assembly, while the Chief Secretary and the IG Punjab also played a vicious role in this matter. Prior to the handover ceremony, he said the Governor House was cordoned off in the name of security and the Chief Secretary tried to put pressure on the Governor by justifying the High Court orders.

Later, the Governor Punjab also wrote a letter to COAS General Qamar Javed Bajwa on the current situation, along with the letter to the Commander-in-Chief and also sent copies of the letters of the President and the Prime Minister.

Omar Sarfraz Cheema requested the Army Chief to play his role in the current situation of Punjab to implement the constitutional framework in the province and to restore the confidence of the people in the federal and provincial governments.