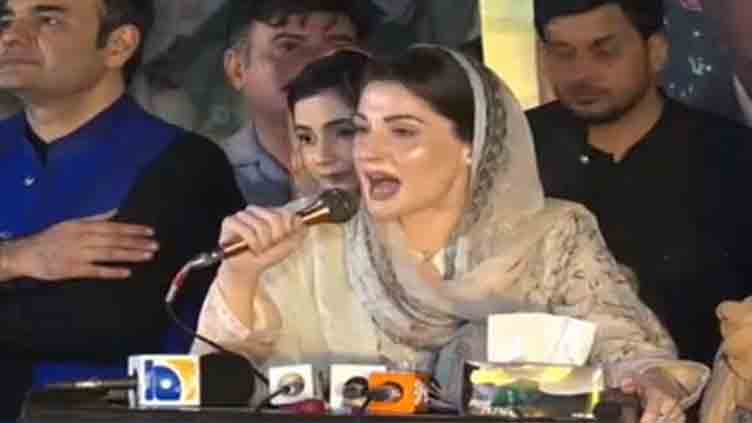 LAHORE (Dunya News) – Pakistan Muslim League- Nawaz (PML-N) Vice President Maryam Nawaz on Tuesday called the former Prime Minister Imran Khan a political imposter and said that PML-N is not afraid of elections. Khan cannot compete with Nawaz Sharif, if the performance is zero then conspiracy drama has to be created.

Addressing the Workers’ Convention at NA-128, the PMLN Leader bashed PTI Chairperson on his statement regarding Toshakhana gifts saying that the gifts were not his family property.
Gifts of the state and will of the state, she added.

Maryam Nawaz brutally criticized Imran Khan exclaiming that the gifts he sold belonged to the state. He has sold the presents from friend countries of Pakistan for 180 million, she said.

According to the PMLN leader it was not a bargain of gifts, but of the friendly ties that Pakistan holds with other countries. Maryam Nawaz further said that when the court asks for an answer, he says the friend countries will mind.

She also responded to the statement made by Khan regarding courts being opened past 12 at night saying that the court had to open its doors at that hour because of how PTI government was not taking the law seriously, considering the Prime Minister’s office was turned into Bani Gala. Your personal employees President, Speaker, Deputy Speaker, Governor Punjab betrayed the Constitution, she continued saying.

The PMLN Vice President also criticized President Arif Alvi expressing that if support for Imran Khan is more than being the president then he should step down from the position.

Stand with Nawaz Sharif and Shahbaz Sharif to save the country, said Maryam Nawaz.

Earlier, addressing the workers convention, newly elected Chief Minister Hamza Shehbaz Sharif said that there was no conspiracy against the selected, incompetence was reason for demise of Imran Khan’s government.

After the departure of Niazi government, we are returning to the old Pakistan, he said.

Further criticizing Imran Khan, the PMLN leader stated that those who violated the constitution will not be forgiven.

Hamza also called out Imran Khan saying that after Eid, wherever you will hold a rally, we will also hold a power show there. I will serve the people in the area where I am standing.

PMLN will be victorious in the general elections, he said.