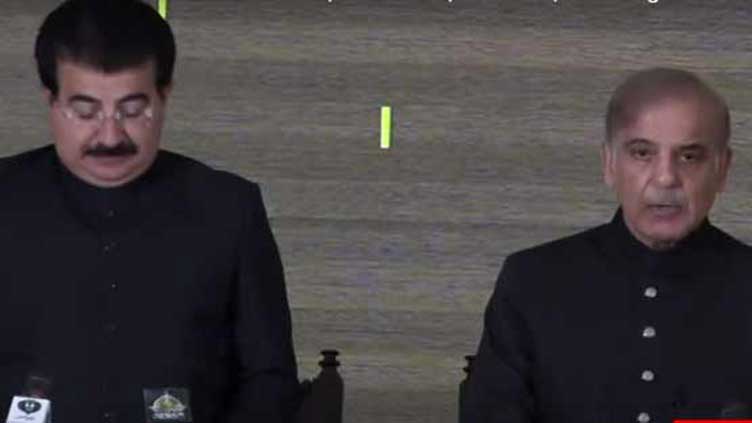 ISLAMABAD (Dunya News) - PML-N President Shehbaz Sharif has been elected today (Monday) as the new Prime Minister of Pakistan after PTI MNAs announced the boycott of Parliament session for the election for the new premier.

Announcing the results, Member Panel of Chairpersons Ayaz Sadiq said Shehbaz Sharif secured 174 votes while there was no vote in favor of Shah Mehmood Qureshi.

According to sources, oath taking ceremony of the newly elected Prime Minister was held at the Presidency.

Prime Minister-elect Shehbaz Sharif has announced to arrange at the earliest an in-camera briefing for Parliamentary Committee on Security on the matter of a letter received by the last government from a Pakistani ambassador about an alleged foreign conspiracy for regime change.

In his maiden speech after being elected as Leader of the House on Monday afternoon, he said the services chiefs, DG ISI, the Foreign Secretary and the Ambassador concerned will be invited to the briefing.

Shehbaz Sharif said the PML-N led coalition government would work hard with unity to resolve issues prevailing in the country.

Shehbaz Sharif expressed confidence that the situation will improve in days to come through hard-work of the new government. He said as servant of Pakistan, he would do his best to bring the country out of crises.

Earlier, during the process to elect the news prime minister, Member Panel of Chairpersons Ayaz Sadiq, who was in the chair after Deputy Speaker Qasim Khan Suri took initial proceedings, read out the names of candidates Mian Muhammad Shehbaz Sharif of the Pakistan Muslim League-Nawaz (PML-N) and Shah Mehmood Qureshi of the Pakistan Tehreek-e-Insaf (PTI), whose nomination papers for the top slot were accepted by the National Assembly Secretariat.

Following this, he directed to ring the bells for five minutes enabling the House members not present in the Chamber to be present.

As the bells stopped ringing, all the entrances to the Lobby were locked for any entry or exit till the completion of the voting process.

The chair asked the lawmakers for a simple division to cast their votes in favour of their candidates.

Mian Muhammad Shehbaz Sharif is the unanimous candidate of the parliamentary parties including PPPP, PML-N, BAP, MQM, BNP-Mengal, ANP, MMAP and independent candidates in the 341-seat House (excluding a seat that fell vacant due to demise of MNA Khayal Zaman Orakzai) that had secured 174 votes in the no-confidence motion to knock out the PTI government.

He said as per the decision of the federal Cabinet, the letter would be dispatched to the Chief Justice of Supreme Court , in which Pakistan had been warned of dire consequences in case of failure of no-confidence resolution against Imran Khan.

Suri said he had great respect for the apex court, and defended his April 3 ruling saying it was given being a true and patriotic Pakistani besides custodian of the House.

He alleged that opponents of PTI in the National Assembly had no common agenda, terming them an unnatural alliance having different ideologies.

He alleged that Imran Khan’s government had been toppled under an international conspiracy.

He also counted his government’s achievements on economic, social and health sectors.

Expressing concerns over the international conspiracy, he announced to boycott the election process of Leader of the House and resignation of PTI members in protest of regime change plot.

Former prime minister Imran Khan, earlier in the day, decided to tender his resignation as a member of the National Assembly ahead of the election for the new prime minister of Pakistan. This development comes after Imran Khan said that he will not sit in the assemblies with ‘thieves’.

"The man who has 16 billion and 8 billion rupees of corruption cases, whoever selects and elects the Prime Minister can not be a big insult to the country. We are resigning from the National Assembly," Imran Khan was quoted as saying by PTI’s official Twitter account.

The voting on the no-confidence motion against the Imran Khan-led Pakistan Tehreek-e-Insaf (PTI) government was held in the country’s National Assembly late on Saturday night, with 174 members recording their votes in favour of the motion that ousted the Imran Khan government.