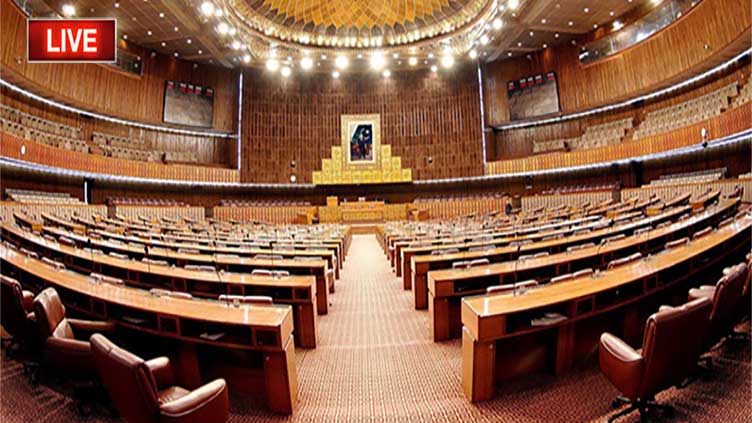 President has dissolve the National Assembly on PM's advice.

Earlier, in an address to the nation, Prime Minister Imran Khan said he had advised President Arif Alvi to dissolve assemblies.

The announcement came moments after National Assembly Deputy Speaker Qasim Suri, who was chairing today s session, dismissed the no-confidence motion against Prime Minister Imran Khan, terming it a contradiction of Article 5 of the Constitution.

In his address, Prime Minister Imran Khan congratulated the nation for the no-trust motion being dismissed, saying the deputy speaker had "rejected the attempt of changing the regime [and] the foreign conspiracy".

Imran Khan said he had been receiving messages from many people who were worried, adding that "treason" was being committed in front of the nation. "I want to say,  ghabrana nahi hai  (do not worry). God is watching over Pakistan."

He said he had written to the president with advice to dissolve the assemblies, adding that the democrats should go to the public and elections should be held so the people could decide who they wanted in power.

Opposition lawmakers, who earlier appeared confident of the success of the no-trust move as they made their way to Parliament House, protested against the decision.

The Opposition parties needed 172 members of the 342-member National Assembly to oust Khan and already they had claimed the support of 176 members, more than the needed strength to oust the prime minister.

GET ALL THE LATEST UPDATES BELOW

Terming the prime minister’s move "unconstitutional," Opposition Leader Shehbaz Sharif said both Khan and the deputy speaker would be tried for "high treason."

The two, according to him, have acted against the constitution.

He said the opposition is approaching the Supreme Court against Khan’s "unconstitutional" act.

Bilawal Bhutto Zardari, the chairman of the Pakistan Peoples Party, said, "Government has violated constitution. Did not allow voting on no confidence motion. The united opposition is not leaving parliament. Our lawyers are on their way to Supreme Court. We call on all institutions to protect, uphold, defend and implement the constitution of Pakistan. We will move the Supreme Court and ask it to hear the case."

Government has violated constitution. did not allow voting on no confidence motion. The united opposition is not leaving parliament. Our lawyers are on their way to Supreme Court. We call on ALL institutions to protect, uphold, defend & implement the constitution of Pakistan pic.twitter.com/sThqng0SI5

Former Minister of State for Information and Broadcasting Farrukh Habib on Sunday said that the nation should prepare for the upcoming elections as the elections will be held in 90 days.

The Minister for Information also said that Pakistani’s residing abroad are given the right to vote by the parliament therefore the opposition cannot take that right of the overseas Pakistani’s back.

Former Minister for Information and Broadcasting Chaudhry Fawad Hussain on Sunday said the Federal Cabinet had been dissolved.

Prime Minister Imran Khan, however, would continue his duties under Article 224 of the Constitution, he said in a tweet.

Taking notice of the dissolution of the National Assembly, the Supreme Court of Pakistan has formed a special bench to review the matter.

Former Governor Punjab Chaudhry Sarwar on Sunday said that said if there is an international conspiracy against the incumbent government then it was electing Buzdar as Chief Minister of Punjab.

Sarwar said that despite having several prominent candidates, including Fawad Chaudhry, Imran Khan decided to pick Usman Buzdar as the chief minister — as only he could move Punjab towards the goal of "Naya Pakistan".

PPP has challenged Deputy Speaker s ruling in Supreme Court of Pakistan. It has argued that the deputy speaker violated article 66 and 17 of the constitution.

16:00: ARMY HAS NOTHING TO DO WITH CURRENT POLITICAL SITUATION OF THE COUNTRY: DG ISPR

Inter-Services Public Relations (ISPR) Director General Major General Babar Iftikhar said on Sunday said that the army had nothing to do with the political developments in the country. Read More

16:30: CJP REACHES SC, HEARING ON PREVAILING TO BEGIN AT 5PM