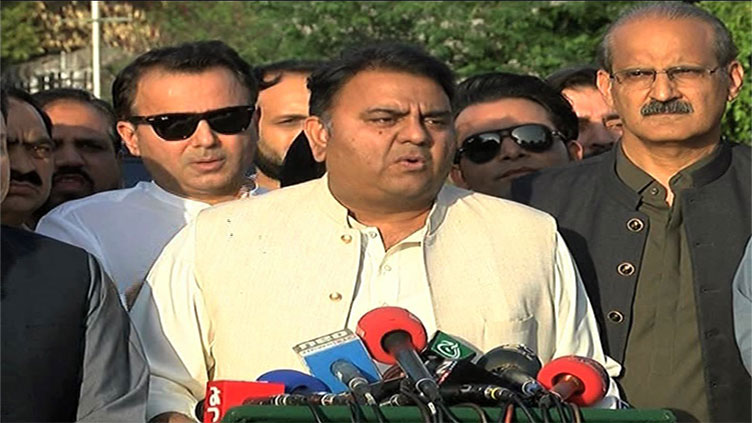 Fawad Ch said some opposition leaders were involved in conspiracy and taking dictation from abroad.

ISLAMABAD (Dunya News) - Minister for Information and Broadcasting Chaudhry Fawad Hussain on Thursday said there were many reasons to believe that the no-trust move was not indigenous rather foreign powers were involved, which were bent on ousting the prime minister for pursuing an independent foreign policy.

“We have called some parliamentarians and opposition leaders to show them evidences [of the foreign plot], but their boycott strengthens our stance that some opposition leaders are fully involved in the ‘regime change conspiracy’,” he said while talking to the media after the National Security Committee meeting, attended here by the top civil and military leadership.

Flanked by Minister for Energy Hammad Azhar, he said only some of opposition leaders, not the entire lot, were involved in the conspiracy and taking dictation from abroad.

Had the no-confidence move originated from within the country, the opposition leaders would have showed keenness to attend the in-camera session of the Parliament proposed by the government the other day, he noted.

The minister said it was possible that the Pakistan Tehreek-e-Insaf’s dissident members of the National Assembly might not know about the foreign conspiracy and might change their mind after seeing the evidences.

“I want to ask them to hold their decisions and attend the [Parliamentary] National Security Committee meeting so that they can see the documents confirming that the conspiracy to oust the prime minister has been orchestrated on the desire of international powers,” he added.

He alleged that Pakistan Muslim League-Nawaz leader Nawaz Sharif along with some media persons were involved in the conspiracy which was only aimed at ousting the prime minister from the power.

Referring to the meetings of Nawaz Sharif with Indians and Israeli diplomats, he said the conspiracy was hatched at his London flat on the dictations emanating from somewhere else.

He ruled out any possibility of the prime minister’s resignation, saying Imran Khan would fight till the last ball. “This is not the fight of Imran Khan rather of the nation, the country’s sovereignty and integrity,” he added.

The minister lashed out at specific opposition leaders for their involvement in the conspiracy which was rejected by the people of Pakistan.

As regards the “threat letter”, he said it contained a clear warning to change the regime in the country and was presented before the NSC for the discussion. An in-camera session of the Parliamentary Committee on National Security was also called and the prime minister would also address the nation, shortly.

More developments on the letter would be shared with the media on Friday, he added.

To a query, he said the nation stood by the prime minister and fully supported him for the independent foreign policy pursued by his government.

Hammad Azhar said the change of regime would help some foreign powers which wanted to influence the country’s foreign policy. It also seemed from the content of the letter that they wanted to oust PM Imran Khan, who, they thought, was pursuing the independent foreign policy.