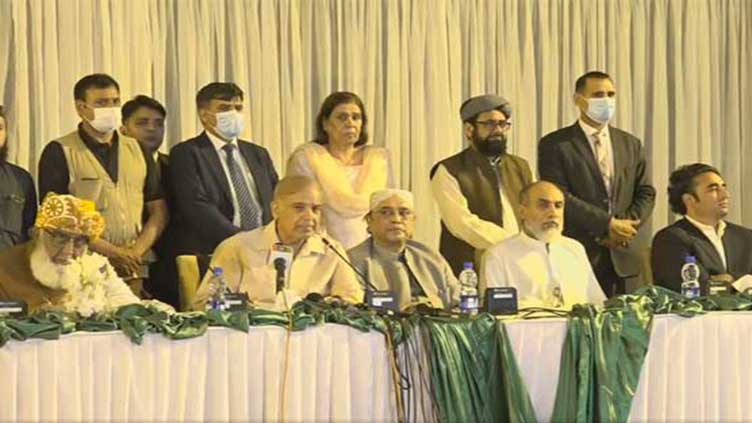 ISLAMABAD (Dunya News) – Amid the current political situation in the country, the joint-opposition has been knocking on many doors to accomplish it’s combined agenda and a new development has emerged in this regard as matters were settled between the ruling coalition Balochistan Awami Party (BAP) and the opposition on the issue of no-confidence motion against the Prime Minister.

Talking to media along with Balochistan Awami Party leader Khalid Hussain Magsi, PDM chief Fazal-ur-Rehman, Pakistan Peoples Party chairman Bilawal Bhutto Zardari and former president Asif Ali Zardari, opposition leader in the National Assembly Shehbaz Sharif said that we sincerely thank the four members of the Balochistan Assembly for standing with us in the no-confidence motion on behalf of the United Opposition.

He further assured that they will make it a priority to resolve the issues being faced by the people of Balochistan.

We will live up to their expectations and work with them to end Balochistan’s deprivation, in the government that will emerge as a result of this movement, said Shehbaz Sharif.

The PMLN leader also added that at this time they have decided to support the united opposition and as a result the government formed after the success of no-confidence motion will fully cooperate and support them in the interest of the people of Balochistan and Pakistan.

Pakistan Peoples Party Co-Chairman Asif Ali Zardari while expressing feelings of gratitude and respect towards the BAP members stated that it was their kindness that they approached him, adding that he negotiated with them and explained to them that if anyone can serve Balochistan then it’s the people in the united opposition.

He further said that it is the time to move on with the no-trust motion, adding that soon we will make Shehbaz Sharif the Prime Minister and get a minister from Balochistan.

I thank members of Balochistan Assembly for their support: Fazal-ur-Rehman

JUI’s parliamentary base is KP and Balochistan, he said.

The President of PDM also said that Imran Khan became a burden even on those who had sent him to fulfill their purpose as he failed to do so.

Imran Khan will cry over his failures. Imposing Imran was the folly of America, Europe and Israel, said Maulana Fazal-ur-Rehman.

I want the country to be handled in a new way: Khalid Magsi

Balochistan Awami Party leader Khalid Hussain Magsi said that now is the time for us to accept the invitation of the opposition.

Balochistan is suffering from constant deprivation, all matters have been settled with consultation, he added.

Khalid Magsi further stated that we want the country to be handled in a new way, issues to be resolved, not to be stuck.

The government ignored us: Akhtar Mengal

Speaking at the press conference, BNP chief Akhtar Mengal said that the present government has ignored us.

Instead of paying attention to our problems, we were ridiculed, the present government has ignored us

He further criticized the incumbent government expressing that they have been highlighting the issues of Balochistan from the start but the government didn’t pat any heed to it.