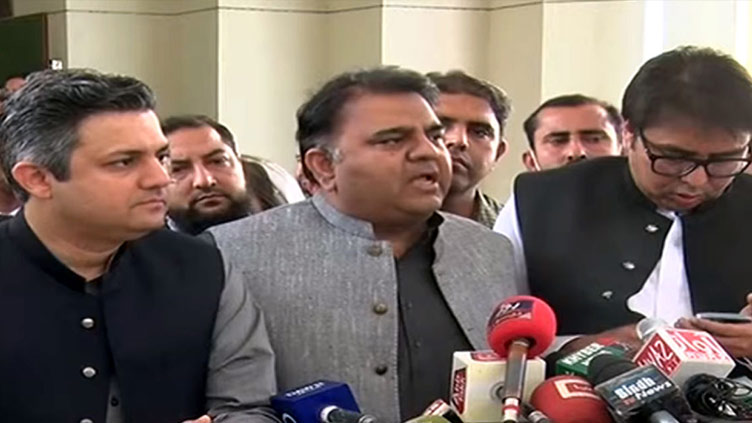 The public gathering of 27th March will be historic: Fawad

ISLAMABAD (Dunya News) - Minister for Information and Broadcasting Chaudhary Fawad Hussain has said the government has full confidence in the Supreme Court that it will move forward in accordance with the law and constitution on the Presidential Reference seeking interpretation of Article 63-A.

Talking to the media persons outside Supreme Court in Islamabad on Thursday, he said we condemn the social media campaign launched by the PML (N) against the five member larger bench constituted for hearing of the Presidential reference. He said it is the hallmark of the PML (N) to attack the institutions.

The Information Minister said the public gathering of 27th March will be historic. He said the allied parties are part of the government and they will remain so.

In his remarks, Minister for Energy Hammad Azhar said it is an old tradition of the PML (N) to make the institutions controversial. He said the no confidence motion moved by the opposition parties is an attack on the country’s economy which is heading in the right direction. He said our economy is growing by five percent whilst record increase has been seen in exports and remittances. This, he said, was not palatable to the opposition parties.

He said the no confidence motion will face defeat. He said Prime Minister Imran Khan has always practiced clean politics and never indulged in horse trading.

Special Assistant on Political Communications Shahbaz Gill said cracks have started appearing in the ranks of the opposition parties.