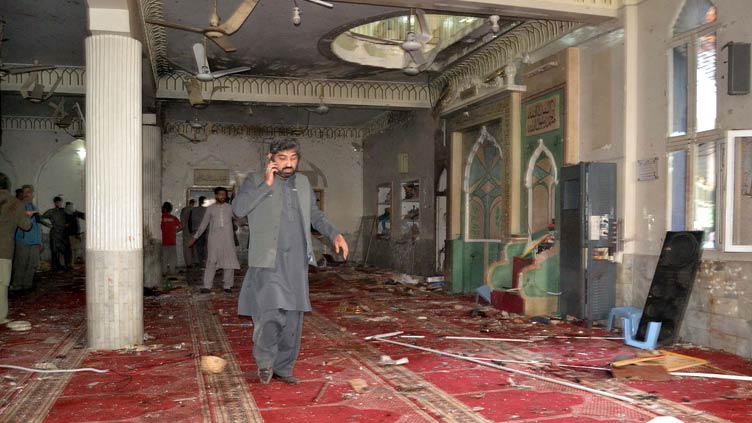 PESHAWAR (Dunya News/AFP) – Death toll in the devastating bombing inside a mosque in Kocha Risaldar area of Peshawar has risen to 62, while five injured are still in critical condition.

According to reports, police and rescue teams reached the spot and statrted a rescue operation. The rescue teams rushed the injured to Lady Reading Hospital, while residents and people of the neighborhood also helped in transporting the injured on their private vehicles.

Police and security teams cordoned off the area and started to collect evidence and the officials declared the state of emergency in the Lady Reading Hospital.

Meanwhile, CCPO Peshawar told that the attackers entered the mosque after an exchange of fire with the police security which also resulted in martydom of one police official and another injured.

"I saw a man firing at two policemen before he entered the mosque. Seconds later I heard a big bang," witness of the incident﻿ Zahid Khan told.﻿

The explosion blew out the windows of nearby buildings, and frantic rescuers were seen ferrying the dead and wounded from the scene.

Prime Minister (PM) Imran Khan has strongly condemned the blast and also demanded a report on the incident.

The PM further advised the concerned officials to provide first aid to the victims at once.

Federal Minister for Interior Sheikh Rashid took notice of the deadly suicide blast inside a mosque in Peshawar and sought report from the chief secretary and Inspector General of Khyber Pakhtunkhwa Police.

In a tweet, the Interior Minister strongly condemned the terrorist attack and expressed sorrow over the loss of innocent lives.

Later, speaking to Dunya News, Sheikh Rashid termed the incident “a conspiracy to destabilize Pakistan at the time when an international cricket team is visiting the country.”

The minister said he chairs meeting every week to discuss internal security issues but there was no such threat alert.