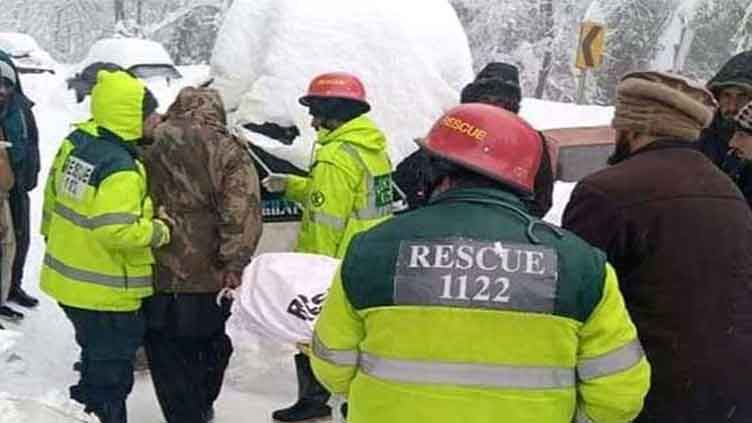 LAHORE (Dunya News) – The irresponsible role of rescue’s emergency services was revealed in the Murree Tragedy case on Monday.

According to the reports, more than 100 people who were trapped in the avalanche sought help from the rescue while the rescue s emergency service kept the helpline callers on the shuttle call.

As per the sources, officers in the control room continued to spend time justifying the shortage of personnel. Rescue personnel also kept reporting that Murree s ambulance was stuck in traffic. On January 7, rescue personnel did not come to help anyone in the snow storm.

According to a victim citizen Muhammad Ijaz Khan, he was trapped in the snow for 20 hours with his family in Kaldana. Rescue 1122 emergency number was contacted more than 80 times for help. The control room representative continued to provide contact numbers of other government agencies.

The victims said that there are 3 emergency stations of Rescue 1122 in Murree for emergencies. Rescue 1122 teams reached the spot the next day to help the victims.

Earlier on Sunday, the tragedy of Murree occurred due to the negligence of the administration, reported the five-membered investigation committee.

According to the sources, the committee formulated the findings into a draft and presented the report before Punjab Chief Minister (CM) Usman Buzdar on Monday.

As per the issued details, the tragedy occurred due to the negligence of the administration . The roads leading to Murree should have been closed after 3 days. The snow had fallen for five days on the routes while the government had closed the routes with a delay of 2 days.

At one place the snow clearing machine was available whole of the staff was not on duty. The Meteorological Department s warning was also ignored.

Earlier on January 9, following the direction of Punjab CM Buzdar, the four-membered investigation committee was formulated.

Chief Minister Punjab Sardar Usman Buzdar conducted an aerial inspection of the areas of Murree, affected due to heavy snowfall.