APS case: PM assures SC of action against those found guilty of negligence 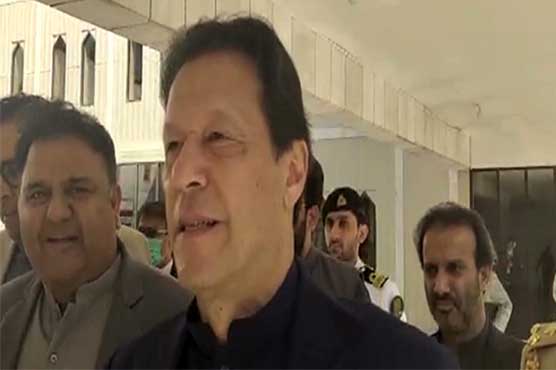 APS case: PM assures SC of action against those found guilty of negligence

ISLAMABAD (Dunya News) – Prime Minister (PM) Imran Khan on Wednesday has appeared before the Supreme Court of Pakistan (SC) in connection with a case pertaining to the carnage at Peshawar’s Army Public School (APS) and assured to take action against those  found guilty of negligence in the performance of their duties.

During the hearing conducted by a three-member bench, Chief Justice of Pakistan (CJP) Gulzar Ahmed asked the premier about the steps taken following the APS massacre. The PM told that at the time of attack, Pakistan Tehreek-e-Insaf (PTI) was ruling Khyber Pakhtunkhwa (KP) and we held an emergency meeting to discuss this sad incident.

He said National Action Plan (NAP) was devised after the mishap, adding that he had warned the authorities to not interfere in United States war during Pervez Musharraf’s tenure. No one is above the law, he clarified.

You order, we will take action, the premier guaranteed the CJP.

You have brought the culprits on negotiation table. Are we going to sign a surrender document again? asked Justice Qazi Mohammad Amin Ahmed.

Meanwhile, Justice Ijaz ul Ahsan said the parents of the martyred children are demanding action against the then rulers. The PM should meet the parents and hear their issues as their satisfaction is necessary, he added.

Subsequently, the court has adjourned the hearing and directed the government to submit PM’s court statement and progress report within four weeks.

Earlier in the day, CJP had summoned PM in personal capacity.

The chief justice asked Attorney General for Pakistan (AGP) Khalid Javed Khan whether he had forwarded the court order to the premier over which, the attorney general told that the order was not dispatched to the PM and assured to inform the prime minister about the court order as early as possible.

The apex judge expressed resentment and remarked, "Is this level of seriousness? Call the prime minister, we will talk to him ourselves. This cannot go on."

Attorney general, on behalf of the government, said that we accept all our mistakes. I would better leave the office but won’t defend anyone, he stated.

The top court remarked that APS attack was facilitated from inside the school as it is impossible for the terrorists to storm the institute without any help. "Where do the intelligence agencies disappear when it comes to the protection of their own people?" the CJP asked.

In previous hearing, the court had assured the parents of the martyred children of full assistance and directed the AGP to put on notice on the complaints and take action according to the law.

The parents had demanded the SC to hold a transparent inquiry into the incident.

Following the hearing, Attorney General for Pakistan Khalid Javed Khan left for PM House and met Imran Khan. He briefed the premier about developments in the case.

On Dec 16, 2014, six Taliban terrorists stormed the school and martyred nearly 150 people, including more than 130 schoolchildren. The deadliest attack in Pakistan’s history and the carnage prompted the government to declare an all-out war against terrorist outfits.

In the wake of the attack, military courts were set up for trying terrorists under amendments made to the Constitution and the Army Act. The Tehreek-e-Taliban Pakistan (TTP) had claimed responsibility for the attack.The mastermind of the APS massacre, Umar Mansour, was killed in a drone strike in Afghanistan in 2017.

Pakistan Army said that all six militants who were involved in the attack executed. The military courts awarded death sentences to 310 militants and 56 of them executed so far, said a statement issued by the Pak Army.

This massacre changed the perception of Pakistan against terrorism and people in the country raised voices for a uniformed action against all types of militants.