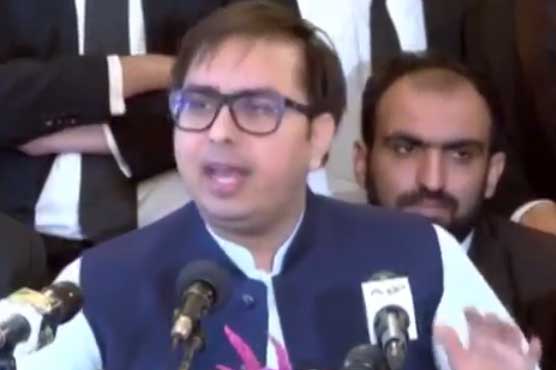 ISLAMABAD (Dunya News) – Special Assistant to the Prime Minister on Political Communication Dr Shahbaz Gill on Saturday has termed that the former premier Nawaz Sharif’s registration of fake vaccination as conspiracy against Pakistan.

Addressing a press conference, the special assistant said that a fake certificate was fabricated to discredit the COVID-19 database. “The PML-N continued to embezzle in Kot Khawaja Saeed Hospital and these politicians did not even think about reputation of the country,” he added.

Shahbaz Gill said that he congratulated Dr Yasmin Rashid for working expeditiously on the issue of fake vaccinations. “Maryam Safdar will have to answer why every incident from ‘Dawn leaks to Vaccine Leak’ goes to PML-N Vice President Maryam Safdar. Maryam with MPAs Imran Nazir and Chaudhry Shahbaz Ahmed prepared this conspiracy together.”

Dr Shahbaz Gill mentioned that Maryam had given this responsibility to a person named Naveed. Fake certificates were fabricated to discredit the COVID-19 database.

“Those politicians used negative politics; they didn’t care about the future of the country. Those who made conspiracy against the country’s national security will have to pay price. Mayram Nawaz should not be given NRO over ‘Dawn Leaks’. Today we are not facing this condition, if the PML-N vice president was not given the NRO.

Shahbaz Gill said that Maryam Nawaz has directly attacked the dignity of Pakistan. “The accused Adil Rafique is an employee of the hospital who was deployed to the hospital by Chaudhry Shahbaz in 2015. Adil Rafique is a PML-N worker, Abul Hassan, and Adil, held at Gujjarpura Police Station and the FIA will interrogate them, while Naveed will also be arrested from Germany soon.”

In response to the statement of Opposition Leader in National Assembly (NA) Shehbaz Sharif, the special assistant said that incompetent Sharifs used politics only for gaining business benefits.

In the name of subsidy, billions of rupees were taken out of the pockets of people for the benefit of their personal business, he said.

Gill said by publishing sugar report, Imran Khan stopped robbery on the pockets of people being carried out for decades. The SAPM said Prime Minister Imran Khan took all necessary measures for the welfare of agriculture and farmers. The government was giving loan of Rs 1,50,000 per family in rural areas for crop cultivation.

He said interest free loans of Rs 2,00,000 were also being provided to the farmers for purchasing tractors and other agricultural machinery.

A sum of Rs 65 billion had been specified under the PM’s Agriculture Emergency Programe in five years, he said.