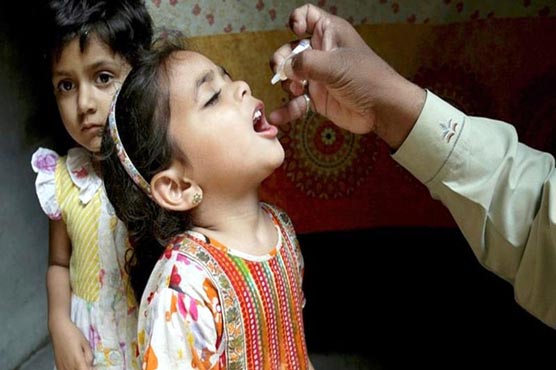 (Web Desk) - A week-long anti-polio drive is going to commence in Sindh from Monday administer polio and vitamin A drops to 9.4 million children up to the age of five years across the province.

The Provincial Task Force on Polio Eradication reviewed the arrangements of the campaign in a meeting held with the provincial health minister Dr. Azra Fazal Pechuho in the chair in Karachi.

It was informed in the meeting that training of 74,435 polio workers across the province has been completed.

Addressing the meeting Dr. Azra Fazal Pechuho said the significant reduction in poliovirus cases in the country is a great achievement.

Five day anti-polio drive will begin in 34 Districts of Balochistan from Monday.

Coordinator Emergency Operation Centre Balochistan Hameedullah Nasar told our Quetta correspondent during the drive around 2.5 million children up to five years of age would be administered anti-polio drops.

He said for this purpose more than eleven thousand teams have been constituted to administer polio drop to the children during door to door drive.