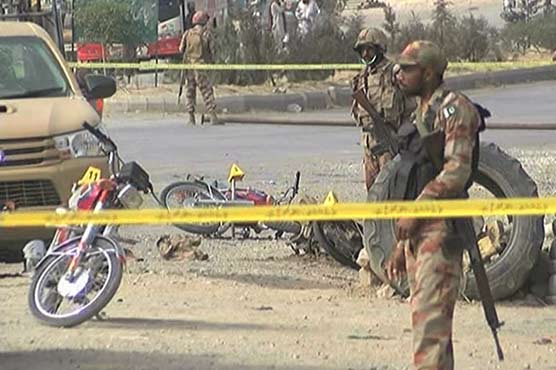 QUETTA (Dunya News) – At least four killed while 19 sustained severe wounds when a suicide bomber on a motorbike blew himself up on Quetta’s Mastung Road today (Sunday).

The bomber targeted Frontier Constabulary guards in the Mian Ghundi neighbourhood of the city, around 140 kilometers (87 miles) from the frontier with Afghanistan.

The security personnel immediately launched rescue operation and shifted the victims to hospital for medical assistance.

Counter-Terrorism Department (CTD) and Bomb Disposal Squad (BDS) said that it was a suicide attack in which 5kg explosive material was used. Emergency has also been declared in all the hospitals of Quetta.

On the other hand, Prime Minister (PM) Imran Khan condemned the suicide attack on Mastung Road in Quetta and extended condolences to the families of the martyrs. He also prayed for the recovery of the injured.

Salute to our security forces and their sacrifices to keep us safe by thwarting such designs.

In their separate condemnation statements, they said terrorists would not succeed in their nefarious plans.