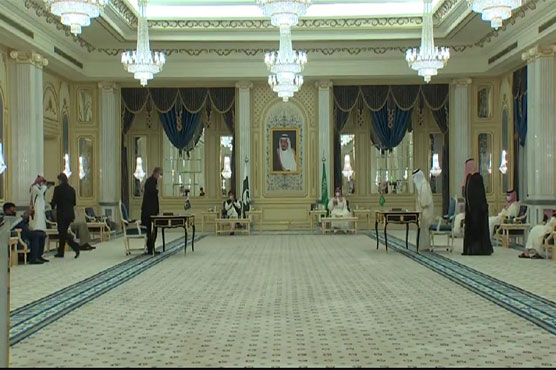 Both PM Imran Khan and Crown Prince Mohammed Bin Salman witnessed the signing of the agreements.

JEDDAH (Dunya News) - Pakistan and Saudi Arabia on Friday signed multiple documents to enhance bilateral cooperation in the fields of energy, media, prisoners exchange and others.

The documents were signed during the visit of Prime Minister Imran Khan who arrived here on a three-day visit along with a high-level delegation.

Both Prime Minister Imran Khan and Crown Prince Mohammed Bin Salman witnessed the signing of the agreements inked by the relevant ministers from both sides.

Both the countries signed an agreement to form Supreme Coordination Council to strengthen the bilateral cooperation in multiple fields.

An agreement for the exchange of convicted prisoners was also signed between the two countries besides another agreement to counter the crimes.

Pakistan and Saudi Arabia also signed a framework agreement on energy projects besides another one in the field of environmental protection.

The two countries signed MoUs to enhance cooperation to curb smuggling as well as on workers’ recruitment.

Earlier, both the countries also held delegation-level talks and discussed the bilateral cooperation including economy, trade, investment, energy and job opportunities for the Pakistani workforce, and welfare of Pakistani diaspora in the Kingdom.

The Crown Prince also hosted a dinner reception for Prime Minister Imran Khan and his delegation who arrived here on a three-day visit to the Kingdom.

The prime minister, along with a high-level delegation, is visiting Saudi Arabi, at the invitation of the Crown Prince. He is accompanied by Foreign Minister Shah Mahmood Qureshi, Interior Minister Sheikh Rashid Ahmed and Senator Faisal Javed. Chief of Army Staff General Qamar Javed Bajwa is already in Saudi Arabia and participated in the delegation-level talks.

On his arrival at King Abdulaziz International Airport of Jeddah, the prime minister was warmly received by the Crown Prince.