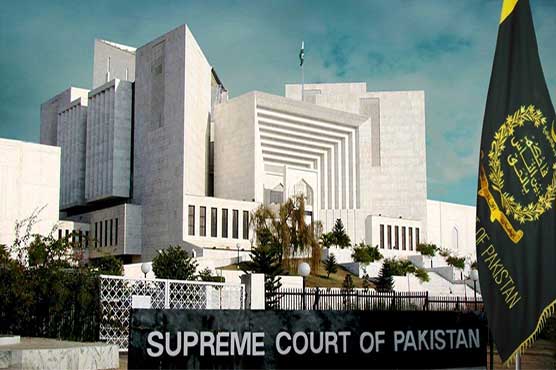 Senate elections are held under Article 226 of constitution: SC

ISLAMABAD (Dunya News) - The Supreme Court of Pakistan (SCP), in its opinion on the presidential reference on open Senate vote has said that Senate elections will be held through secret ballot.

The apex court has directed Election Commission of Pakistan (ECP) to use latest technologies to stop corrupt practices and emphasised that all institutions were bound to follow the ECP.

On last Thursday, the Supreme Court of Pakistan had reserved its opinion over the presidential reference on mode of balloting in the Senate election. A five-member larger bench headed by Chief Justice Gulzar Ahmed heard the case.

Federal Minister for Interior Sheikh Rashid on Monday has termed the opinion of Supreme Court (SC) on presidential reference regarding Senate elections as constitutional and according to the law.

Federal Minister for Finance and Revenue, Dr. Abdul Hafeez Shaikh will win from Islamabad whereas other provinces are considering the option of settlement, he claimed.

Information Minister Shibli Faraz has said the Supreme Court’s opinion on presidential reference is historic under which the Senate elections will be held as per Article 226 of the Constitution.

Talking to the media persons in Peshawar, the minister said the apex court has directed the Election Commission of Pakistan (ECP) to use the latest technology and take the necessary steps to ensure transparency in the polls.

The information minister asked the ECP to take requisite steps for ensuring transparency in the Senate elections in the light of the SC decision.

On December 23, President Arif Alvi, after approving the proposal of the prime minister, had filed a 11-page reference in the Supreme Court under Article 186 of the Constitution relating to the advisory jurisdiction of the Supreme Court and sought its opinion on holding the upcoming elections for the upper house of the Parliament through open ballot and show of hands.

According to the government, the nature of the elections and the way it is conducted has not been clearly mentioned in the Constitution.

According to replies submitted by the three provinces, they have backed presidential reference, seeking guidance from the Supreme Court on the Federal government s plan to amend the Election Act 2017 through an ordinance to allow the use of open-ballot at the upcoming Senate elections.

"It is the considered view of the Punjab that the reference in question may kindly be answered in the affirmative so that by undertaking necessary remedial statutory action, the Election Act 2017 is amended and enable the elections to the Senate to be held through open ballot," pleads Advocate General of Punjab Ahmad Awais in a rejoinder.

"This provincial government supports the reference No. 01, 2020, sent by the President to this Honourable Court," said the KP advocate general in his reply.

Balochistan also supported the call in its written response to the Supreme Court.

Government of Sindh had opposed the presidential reference. In its reply submitted with the Supreme Court of Pakistan (SCP), the provincial government opposed the possibility of holding Senate polls through the open ballot and said that the Senate elections would be held as per the Article 226 of the constitution of 1973.

]Chief Election Commissioner (CEC) Sikandar Sultan Raja appeared before the apex court and maintained that the voters’ identity cannot be revealed as a constitutional amendment is required for identifiable ballot papers.