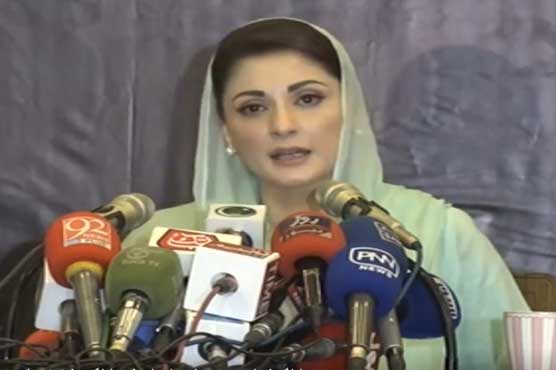 Talking to media in Model Town, the PML-N vice-president said that we demand a re-poll in NA-75 Daska instead of polling on only 20 polling stations adding that PML-N will not sit quite until a re-poll.

She expressed hope that ECP will not become a tool of fake government and will stand against mafia for the honor of its officers. She said that no matter what ECP does, I will not let them breathe a sigh of relief until they return our victory with lead in NA-75.

She alleged that the workers of PTI, its candidate and his nephews opened fire and spread panic among the people. She said that the victory of PML-N in Punjab is worse than death for the government and has made them senseless.

Maryam Nawaz expressed her heartfelt condolences over the loss of two lives during by-polls.

In Wazirabad, a presiding officer was running away with a bag of votes. Polling was stopped where the lion was winning. They had received orders from inside to slow down the polling, she added.

Maryam said that PML-N got a resounding victory in the three constituencies Nowshera, Wazirabad and Daska.

The PML-N vice-president said that the people of Daska, Wazirabad and Nowshera had woken up after the 2018 elections and kept watch over the votes in by-polls, and caught the vote thieves red-handed this time.

While congratulating Ikhtiar Wali on winning the election she said that after visiting Nowshera it became clear that PML-N will win the election adding that Nawaz’s statement has won there.

No one knew where the staff of the Election Commission was, the EC is also saying that there is a suspicion of rigging and re-election should be held at 23 polling stations.