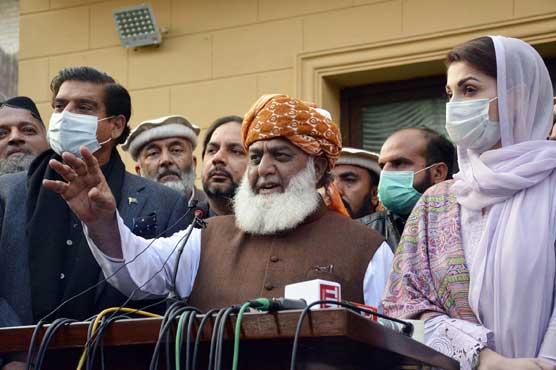 ISLAMABAD (Dunya News) - PDM chief Maulana Fazlur Rehman has termed the foreign funding case as the ‘biggest scandal in the history of the country’ and said that Imran Khan had created political instability by taking "Mother of NROs".

Maulana Fazlur Rehman alleged that Imran Khan was the main accused in the foreign funding case in which private business was done through a secret account. He said that PDM will protest in front of the ECP office and demand an early verdict as the delay is raising suspicions.

Informing about the decisions taken by the PDM steering committee, he said that on January 21, there will be a million march rejecting Israel followed by a rally in solidarity with Kashmiris on February 5 at Liaquat Bagh, Rawalpindi. “There will be a full-scale protest against those who sold off Kashmir”, he said.

He further said that historic rallies would be held in Hyderabad on February 9, Sialkot on February 13, Pishin on February 16, Sargodha on February 23, Khuzdar on February 27, followed by the decision to march towards Islamabad. The final date for the Long March will be announced at the PDM rally, said Fazlur Rehman.