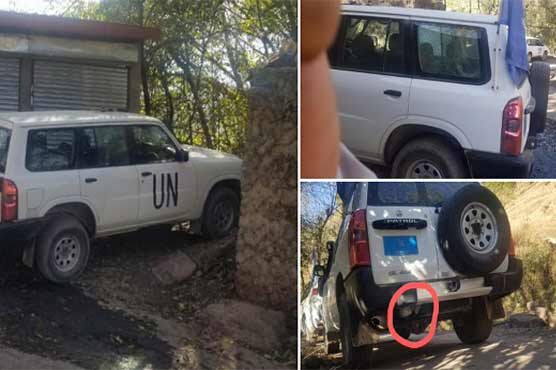 According to a statement released by the Inter Services Public Relations (ISPR), Indian Army resorted to unprovoked fire in Chirikot Sector of LOC on Friday. The Indian troops deliberately targeted a UN vehicle with two military observers on board, who were travelling to interact with victims of Indian ceasefire violations in Polas Village, Chirikot Sector.

ISPR said that UN vehicles are clearly recognisable, even from extended distances because of their distinct make and type as well as clearly visible markings. The statement said that the UN vehicle sustained damage but the two military observers came out unharmed. They were safely rescued and evacuated by forces to Rawalakot.

ISPR’s statement said that such illegal and unlawful acts against by India, which go against all established international norms, signify the malicious intent of Indian Army to target not only innocent civilians residing along the LOC but UN Peace Keepers as well.

This act was a new low and only shows Indian Army’s complete disregard for the principles enshrined in the UN Charter, ISPR said.

It assured that Pakistan Army stands in solidarity with United Nations Military Observer Group in India and Pakistan (UNMOGIP) officials and appreciates their selfless services rendered in discharge of their UN mandated duties.