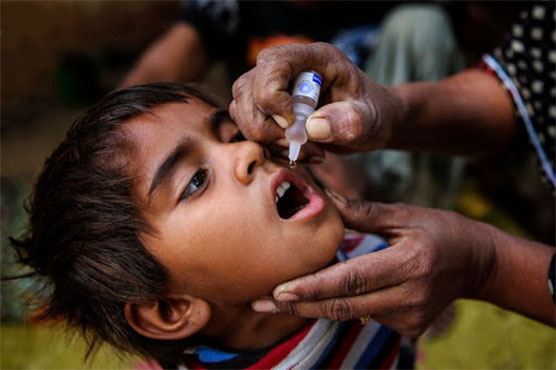 A total of 82 polio cases have been reported so far in Pakistan this year.

ISLAMABAD (APP) - A five-day national immunization drive will start today (Monday) to vaccinate over 39 million children under the age of five across the country, Dunya News reported.

According to an official of Polio Eradication Initiative (PEI), around 285,000 polio frontline workers will visit house-to-house, observing strict SOPs for COVID-19, to ensure protection of Pakistani children from the crippling polio virus.

On Sunday, Special Assistant to the Prime Minister, National Health Services, Regulations and Coordination, Dr Faisal Sultan said, “The government is committed to make Pakistan Polio-free. We are determined to close the immunity gap in children which had unfortunately widened because of disruption of essential services due to COVID-19 pandemic.”

He said, “Ensuring timely and repeated vaccination of children is critical for us to reduce the immunity gap and protect them against polio. I therefore, urge all parents and care givers to ensure polio vaccination to their children during the campaign as well as in routine.”

Dr Faisal said, “I am confident, together we will achieve our target of making a safer, healthier and polio-free Pakistan for our children.”

During the campaign, the trained polio frontline workers will reach every child with essential polio vaccine while adhering to strict COVID-19 standard operating procedures such as wearing mask, using hand sanitizer, and maintaining at least minimum distance during vaccination. The campaign has been planned in synchronization with Afghanistan.

“While continuing our efforts to enhance essential immunization coverage across, the back-to-back planned immunization campaigns are imperative to give quick immunity boost to children under the age of five,” said Dr Rana Muhammad Safdar, Coordinator of the National Emergency Operations Centre, Polio Eradication Initiative (PEI).

“We need to ensure that no child is missed during this critical national immunization campaign aimed to build on successful immunity building efforts during last three months. I urge every Pakistani to take it as a national mission and support the frontline workers who will reach every child with essential polio vaccine during the week.”

Rana Safdar said that all segments of society including communities, media, religious leaders, social activists, celebrities and doctors should play active role so that no child remains at risk of contracting polio disease and getting paralyzed for life.

He said that Pakistan was one of the two polio-endemic countries in the world along with its neighbour Afghanistan. The currently is facing a challenging situation in polio eradication with the upsurge of the number of polio cases.

He added so far in current year, a total of 82 polio cases have been reported including 24 from Balochistan, 22 each from Khyber Pakhtunkhwa and Sindh, and 14 from Punjab.

He said that Polio was a highly infectious disease caused by polio-virus mainly affecting children under the age of five years. It invades the nervous system and can cause paralysis or even death. While there is no cure for polio, vaccination is the most effective way to protect children from this crippling disease.

He said that each time a child under the age of five is vaccinated, their protection against the virus is increased while repeated immunizations have protected millions of children from polio, allowing almost all countries in the world to become polio free.