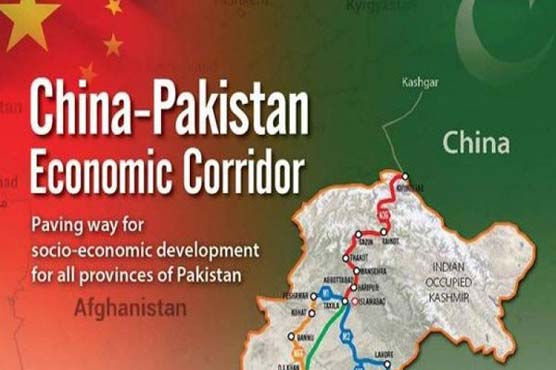 ISLAMABAD (APP) - Despite challenges posed by the COVID-19 pandemic, the China-Pakistan Economic Corridor (CPEC) continued to progress according to planned timelines, thanks to the dedicated efforts both China and Pakistan.

“Demonstrating the close cooperation between Pakistan and China, the CPEC projects remain in full swing despite all the challenges,” according to OP-Ed published in China Daily on Tuesday.

It maintained that since beginning of the pandemic, the two countries cooperated with each other and adopted strict prevention and control measures.

As a result, CPEC projects have been able to continue on the planned timelines, it added.

“A manifestation of the close-knit cooperation between Pakistan and China, the CPEC is the crown of their economic ties and it has been progressing at a steady pace despite the pandemic,” it observed.

The Op-Ed noted that the CPEC remained the largest and one of the most active of all the Belt and Road programmes and was contributing toward the realization of the vision and mission to create a modern Silk Road that is based on connectivity, togetherness and a community with a shared future.

It is also important to note the CPEC projects remain safe from the virus even though there were thousands of people working in both Pakistan and in China, it added.

According to OP-Ed published in the China Daily, at a time when a second wave of the novel Coronavirus has begun and already the public health crisis has had a huge impact on the global economy, one of the few bright spots is China’s economy is rapidly recovering after it took decisive action in its battle against the virus.

Currently the people-centric second phase of the project is ongoing, with special focus on agriculture cooperation, industrial cooperation and socioeconomic development.

The CPEC is helping to alleviate poverty and improving people’s lives. Pakistan is expected to build an economic development environment that can offer more than 2.3 million employment opportunities.

Although, the pandemic has been a severe test for all countries, however, Pakistan and China had been steadfast in their support for each other.

During the pandemic, China has provided material support to Pakistan, including masks, ventilators, medicines and all kinds of supplies.

And when China was struggling against the virus, Pakistan immediately expressed its solidarity and offered donations and assistance despite its own difficulties.

The Orange Line Metro Train, an early harvest project under the CPEC, was inaugurated in Lahore on Oct 25, it said adding the subway was considered one of the most advanced railway transport projects in South Asia.

In all, nine energy projects of the CPEC have been completed with eight more under construction while these energy projects are helping diverse sectors including agriculture, industry and energy.

The CPEC is attracting investment and building the confidence on Pakistan from across the world. All these developments refute the negative narratives about the CPEC.

Apart from this, the CPEC is also helping to contribute toward the building of a Health Silk Road and a Digital Silk Road.
Being an important artery of the Belt and Road Initiative, the CPEC is diversifying its approach and scope through strong communications, trade and infrastructure and business development opportunities.

The CPEC has helped Pakistan to cope with the challenges resulting from the pandemic.

Through stability at the economic level due to the CPEC, Pakistan has been able to recover faster from the challenges posed by the public health crisis.

And not only has Pakistan befitted from the Health Silk Road but also the dividends that have been shared across the world through the networks and cooperation forged under the framework of the Belt and Road Initiative, it concluded.