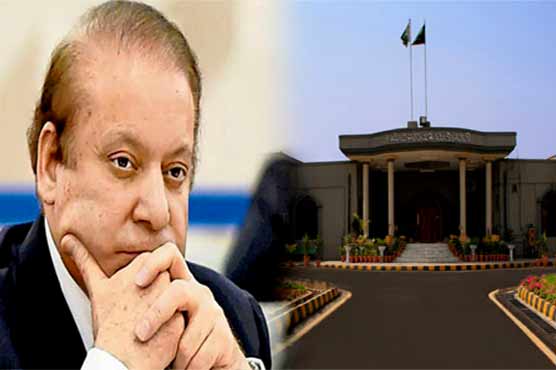 Justice Mohsin Akhtar Kiyani remarked that Nawaz Sharif has to appear before the court for hearing. If he is absconder in the reference then he may face additional three-year imprisonment, he went on to say.

The judge added that skipping appearances in the trial is also a crime over which, the counsel said that Nawaz Sharif is undergoing medical treatment, however, he will return after fully recovering from the illness.

The court said that there is no proof of Nawaz Sharif’s treatment. Khawaja Harris responded, “Federal government can investigate whether the ex-premier is telling a lie or not.”

NAB’s prosecutor had argued law turns onus of proof on accused after ownership of flats [by Sharifs] has been established. He said, “The agreement of money transfer turned out to be fake. Likewise, the deed declaring Maryam Nawaz trustee was also proved fake. She possesses assets beyond her declared source of income.”

Safdar was arrested by the NAB authorities in Rawalpindi on July 9 while Nawaz Sharif and Maryam were taken into custody by the officials after their flight landed at Lahore’s Allama Iqbal International Airport. They were shifted to Adiala Jail.

Afterwards, the IHC had suspended sentences of Nawaz Sharif, Maryam Nawaz and Captain (r) Safdar in the Avenfield reference.

On the other hand, an accountability court had also handed Nawaz Sharif sentence in the Al-Azizia Steel Mills corruption reference, and acquitted him in a second reference related to Flagship Investments.

In the Flagship reference, NAB had claimed that Sharif and his sons set up Flagship Investment Limited and 15 other companies and used these companies “to manage/acquire expensive properties/any movement of funds to hide the real sources of funds.”