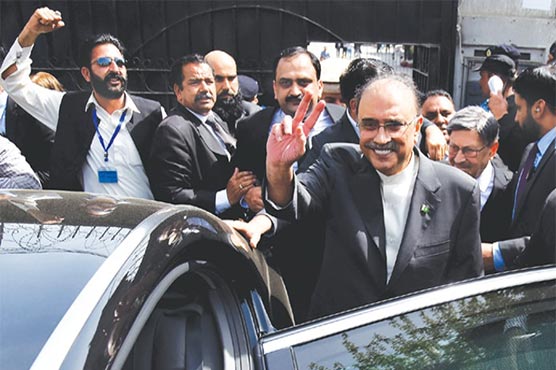 The cases have been adjourned till June 10 due to the outbreak of coronavirus in the country.

During the hearing, exemption pleas of Asif Ali Zardari and his sister Faryal Talpur were submitted in the court.

The accountability judge adjourned judicial proceedings on all the references including Pink Residency and Nehr-e-Khayyam illegal allotment cases till June 10 due to the outbreak of coronavirus in the country.

Meanwhile, lawyer Latif Khosa requested the court to hear the cases after Eid-ul-Fitr.

The Park Lane reference has been registered against Mr Zardari and Ms Talpur under different sections of the National Accountability Ordinance, 1999, and the Anti-Money Laundering Act, 2010.

On Nov. 12, the court had rejected Zardari’s application seeking his transfer to Karachi for treatment by private doctors of his choice instead of physicians of the Islamabad-based government hospital.

On the same day, the court had extended Zardari and Talpur’s judicial remand till Nov. 26 in the money laundering through fake bank accounts case.

The National Accountability Bureau (NAB) prosecutor had presented his arguments in the courtroom.