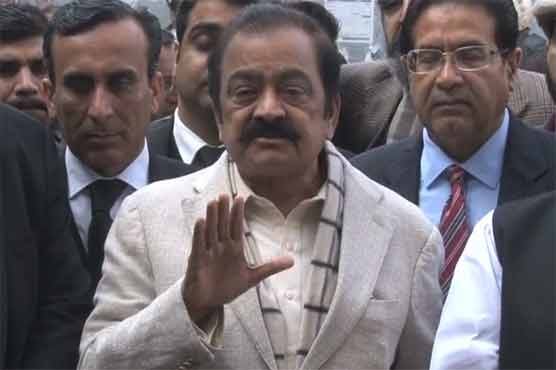 The PML-N’s senior politician stated that Rs60 million have been given to 10 prosecutors in a case against him.

The former law minister, in his talk to the media after appearing before an anti-narcotics court that had in the previous hearing reserved verdict in a petition seeking submission of video evidence against him claimed by the Anti-Narcotics Force (ANF) and recovery of his confiscated vehicle in a drug case, lashed out at the ruling Pakistan Tehreek-e-Insaf (PTI).

“Including their political allies, 22 crore people are also angry with the PTI […] their allies should jump off the PTI’s boat as soon as possible,” he said.

“It a matter of utter shame for the government to lodge fake drug cases against its own citizens […] we are not being provided the required information in the case while a judge was transferred via [an order] using WhatsApp,” he stated.

“PTI was raising hue and cry over verdict in Musharraf’s case and condemned the public hanging [at that time], but yesterday passed a resolution in the National Assembly calling for public hanging [of convicts of sexually abusing and murdering children].”

“The resolution passed yesterday is a blow to the PTI,” he added, while demanding to hold midterm elections as soon as possible. “PML-N is not in favour of midterm setup.”

The PML-N Punjab president had filed a petition in court praying to release his vehicle on supardari.

His counsel Advocate Farhad Ali Shah had in the earlier hearing argued that Rana Sanaullah had acted against several outlawed groups as law minister and faced threat to his life. He pleaded for return of the bullet-proof vehicle that is in the custody of the ANF.

The ANF counsel while opposing the plea, had argued that Rana Sanaullah didn’t express any apprehension about threat to his life earlier. He had said the vehicle was taken into custody in a drugs case and it could not be handed over on supardari.

The court had reserved the verdict and adjourned hearing till today.

The ANF had also sought permission from the Supreme Court to take into custody PML-N leader and former Punjab law minister Rana Sanaullah through a petition challenging the grant of bail to him by the Lahore High Court.

The LHC had on Dec 23, 2019 ordered the release of Rana Sanaullah in a narcotics case lodged after ANF recovered 15kg heroin from his vehicle. The court also ordered Sanaullah to submit two surety bonds of Rs1 million each.

In its appeal moved through Advocate Raja Ameen Minhas, the ANF had requested the Supreme Court to recall the high court verdict and grant it permission to re-arrest the PML-N leader.

The FIR was lodged under section 9 (C) of Control of Narcotic Substances Act 1997, which carries death penalty or life imprisonment or a jail-term that may extend to 14 years along with a fine up to Rs1 million.